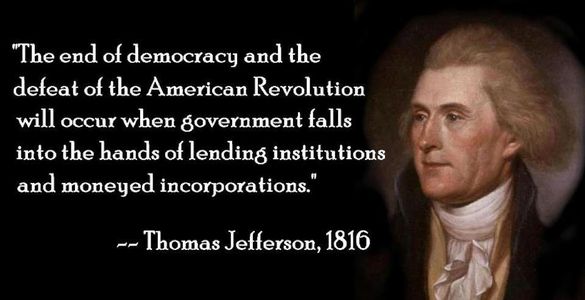 There is a lot wrong in America, and we hear a lot about corporate corruption and influence in government, most of it starts with elected officials. without term limits pandering to corporations because they have been allowed to invest and more money for corporations means more money for them. Congress members did not become millionaires on their salaries people. Far too many are not aware of just how important it is to stop members of Congress from being allowed to own and trade stocks in these mega corporations.

They are financially influenced by their investments when voting to pass laws, budgets, food and drug approvals that affect American citizens, award contracts, etc.... How do you think we ended up not only with Genetically Modified foods, but food disparagement laws that they cannot be labeled or "discriminated" against. Why do we go to war so often? Because war is a money maker for the big corporations that blow things up and rebuild them.

We are hearing more and more about corporations and insider trading, and many watery bills are sprouting and making headlines. The proposed STOCK ACT is NOT strong enough. Do not let Officials, our legislative lawmakers continue to monitor themselves. Demand RROOTS Real Restrictions On Officials Trading Stocks. Divest or Resign. (Of NOTE: 2011 STOCK Act escinded before put into effect)
http://nyulocal.com/national/2013/04/15/congress-quietly-repeals-congressional-insider-trading-ban/#ixzz32DTWwdg5 )
No More corporate influence in Congress. They know it's wrong, they know what they've done, now let's stop them, No Other Bill will accomplish as much or solve as many of America's problems as this would.

In America politicians beat the hedge fund managers in the stock market by trading on non-public information gained while performing their public duties. American politicians don't have to divest when they assume federal office, they trade freely while in office. Multiple Studies indicate strongly that U.S. Senators trade common stock with a substantial informational advantage compared to ordinary investors and even corporate insiders.

These elected officials approve budget expenditures and spend millions and billions of taxpayer dollars paying for the research these corporations need to hawk their wares with blessing.

These same elected officials that fund the supporting research for these corporations to develop these products, which of course includes a lot of contracts and secret military spending, also arrange and sign the contracts securing services and goods.

These same elected officials then pass the laws, legislation and approvals allowing the citizens of America to be exposed to questionable vaccines, chip implants, Genetically modified foods, aspartame and Hfs and Human Growth hormones, and chemtrailing, etc etc..... Haven't you ever asked yourself WHY are we even developing half of these things? Do we want them? Google stupid government funded studies and see where your tax dollars go..and then ask why.

These legislators then pass laws Protecting these corporations and their questionable products and practices, for example Food Disparagement Laws that prohibit saying GE foods or foods with Human Growth Hormones added, or high fructose sugar are any different from any other food. This past decade has seen more spending and more top secret blocking of access to information regarding the spending.

Why? Why do they do it? Because they make millions on Wall St. The American people, the Sherman Anti Trust, the injustice all around...none are as important as these companies too big to fail and their shareholders. How do they do it? Because they have all worked together for decades.
These same elected officials are now trying to tell us We Do Not Even Have A Right to Protest.

Time to Evict Wall st. From Our White House Just like they are evicting Occupy protesters

That is why we demand  No Member of our House or Senate can own stocks and we need TERM LIMITS for ALL.

WE CAN fix our Country< TELL OUR ELECTED OFFICIALS it is TIME NOW< The game is up!!!! We the 99% People of the United States of America DEMAND TO BE HEARD< Now is the time ..do we say YES we want GM foods? YES We want to go to war? YES we want tax breaks and loopholes for corps? YES we want more privatized prisons so elites can trade prisoner labor at a high hourly wage for IN Kind budget deals ? YES we want those vaccines given to all school children? YEs yes we want the elite to continue to make more money than anyone could spend in a lifetime> WELL GUESS WHAT CONGRESS> WE THE PEOPLE DO NOT SAY YES AND WE WILL BE HEARD< THE FOCUS IS ON "YOU" > The President is a puppet compared to the combined powers of House and Senate, and will not matter who it is until we take out the trash. Some of these senate and house members are America's Little dictators...the head of the "regime".

WHY WE OCCUPY: Article. I. Section. 1. All legislative Powers herein granted shall be vested in a Congress of the United States, which shall consist of a Senate and House of Representatives. THIS IS WHERE AMERICAS' DECADES LONG DICTATORSHIPS ARE...The "Regime" ....THESE ARE THE ONES MAKING AND BREAKING THE LAW. Members of Congress, our House and Senate hold all the power, and they are ensconsed like America's little dictators, they are the "regime". TELL THEM ALL< No More trading stocks AT ALL. Divest Or Resign Nothing Less!!! No More Corporations running America we ARE a Democracy!!! And LIMIT THEM TO ONE TERM End the Croniism...and their comfy cooperative manipulations of America. Sign this one, make a sign for the next protest< spread the knowledge< knowledge is power< Congress holds all the power < and the ppl that WANT to be in Congress, the ones with the power passing our laws and regs< are the same ppl that LOVE CORPORATIONS ABOVE ALL ELSE< for the MONEY that they make by being their YES men> YES we want GM foods, YES We want to go to war< YES we want tax breaks and loopholes for corps< YES we want more privatized prisons so we can trade prisoner labor at a high hourly wage for IN Kind budget deals , YES we want those vaccines given to all school children YEs yes we want to make more money than anyone could spend in a lifetime> WELL GUESS WHAT CONGRESS> WE THE PEOPLE DISAGREE!!!! AND WE WILL BE HEARD< THE FOCUS IS ON "YOU" >. IT IS TIME< BE HEARD> Spread the word Divest or Resign & Term Limits for all.