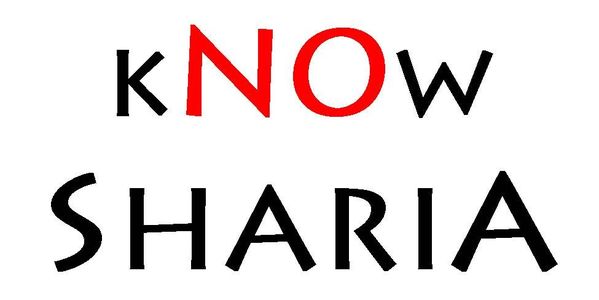 We the undersigned respectfully submit to you this Citizens' Declaration of Threat & Plea for Relief which outlines the jeopardy Islamic Sharia Law presents to the United States and delineates 18 legislative actions to protect America.

Islamic Sharia Law condemns freedom of speech, religion, conscience and action; it forbids equality between men and women and between believers and non-believers.

The essence of Islamic Sharia Law is the denial of human rights; it is legitimate that we reject it.

We must Secure Human Liberty.

We citizens of the United States of America, in order to preserve for posterity the foundation of liberty bestowed upon us by our founding fathers through our Constitution, do recognize the United States to be under grave threat of invasion, domestic violence and insurrection from elements within Islam. We respectfully declare the causes which lead to this belief and register our plea for relief.

Islam is both theological and political in nature, as revealed in generally accepted renditions of the Quran, Sira, Hadith and Islamic law known as Sharia, whose expressed ambition is to bring the world into a state of submission to Allah and divine (Sharia) law;

Core tenets of Islam are irreconcilably in conflict with the United States Constitution, identified in part as infringements upon freedom of religion and expression, lack of equality among people and between the sexes, and sanctioned deception in dealing with non-Muslims; these precepts constitute a breach of inalienable human rights;

Political Islam's supremacism represents a duality of existence, placing Muslims superior to non-Muslims, and endorses behaviors that can debase, harm or kill non-Muslims;

History is replete with examples of the aggressive and violent expansion of Islam across Africa into Europe and across the Middle East into Europe and Asia, offering an invitation to Islam, subjugation under Islam with inferior class status, or jihad war;

Current events are filled with examples of the Islamic expansion and imperialism through violent and covert jihad, including Kosovo, India, Kashmir, Malaysia, Philippines, Sudan, Kenya, Israel, United Kingdom, France, Algeria, Morocco and others;

The attacks of September 11, 2001 upon the United States, its financial institutions, its people and traditions were claimed by people as jihad in defense of Islam, to spread Islam and to subjugate, obliterate, or otherwise defeat the United States;

Sharia finance has been shown to fund jihad against the United States and the West;

Many followers of Islam through words and deeds encourage insurrection and incite violence toward United States to subjugate it and replace the Constitution with Islamic rule; and

Many more silently endorse or use intimidation to support armed or covert jihad, thereby providing aid and comfort to our avowed enemies during these times of domestic and international strife.

Now Therefore We the People...

...appeal to the President, Congress, and Supreme Court for relief from these dangers and to defend the people of the United States, our traditions and legal underpinnings from threats posed by political Islam, its leaders, its followers, or any other aligned force. We state that any nation so threatened from within or without has the responsibility, obligation and right to defend itself and its people from aggressors. This declaration and plea are deemed legitimate demands upon our government; Article IV, Section 4, of the Constitution requires the United States to protect each state against threat of Invasion and domestic Violence. Continued accommodation, appeasement and hopeful assimilation constitute surrender to a totalitarian ideology. The duty rests upon this generation to defend this nation for ourselves and posterity. We cannot allow liberty borne of more than 2,000 years of civil development to be vanquished.

1. That political Islam and Sharia law be officially recognized by the federal government as threats to the United States, the Constitution, and American culture and institutions.

2. That Title 18 USC Chapter 115: Treason, Sedition and Subversive Activities, including incarceration and deportation, be fully utilized as duly appropriate for advancing Sharia law, advocating or acting to implement jihad or other acts detrimental to security.

3. That Department of State programs, policies, training and relationships be evaluated for their compatibility with national security, and amended accordingly.

4. That foreign aid to Islamic nations cease and aid to nations influenced by Islam be severely curtailed, except to resist jihad.

5. That participation in the United Nations be reassessed based on human rights, security and relevancy.

6. That the courts and law enforcement be trained to recognize Sharia law, Muslim Brotherhood activities and the manifestations of jihad; and that jihad crime statistics made available.

7. That immigration reforms immediately be implemented to include a suspension of Muslim immigration, refugees and asylees for not less than 20 years, exclusive of apostates seeking asylum.

8. That all prospective immigrants be characterized for their compatibility with the United States Constitution and be required to pledge an oath of allegiance, with violators deported.

9. That visa applicants be rejected for seditious history, or intent or association with jihad and that any foreign visitors exhibiting seditious behavior be arrested and/or deported.

11. That our borders be secured by means of physical barriers, patrols and military actions as necessary to repulse illegal entrants.

12. That the legacy of jihad be subject to critical analysis in civil and military education.

13. That no foreign influence or advocacy be tolerated in public school textbooks or materials.

14. That no foreign ownership be allowed of any media that purports to provide news services.

15. That no public monies or services shall be dispensed to encourage social separation in courts, schools, hospitals or other public or private places.

16. That any mosque violating its religious standing be reclassified as political in nature and subject to tax laws and if deemed appropriate other civil and criminal laws.

17. That any mosque found to engage in political organizing, allow or encourage incitement to violence, subversion or jihad be closed for not less than 2 years, and permanently for a second such finding.

18. That no additional mosques be allowed until Islamic countries reciprocate in international relations, freedom of religion and houses of worship, and social equality.

We cannot accommodate hostile customs, tolerate unconstitutional behavior nor appease our adversaries without losing what it means to be American.