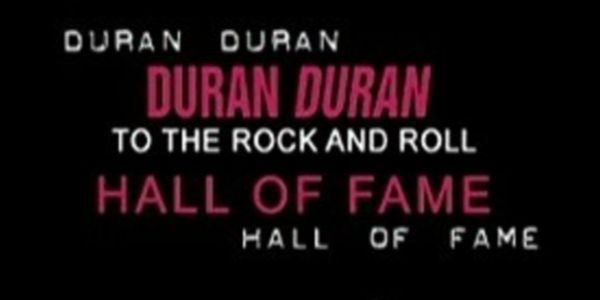 Duran Duran to the Rock Hall of Fame (#DDTTRH)

THIS IS AN OPEN PETITION, NOT TIED TO A PARTICULAR YEAR, OPEN FOR AS LONG AS IT TAKES!!  All personal information entered is kept confidential and not shared with 3rd parties.

We believe it is time for Duran Duran to be inducted in the Rock and Roll Hall of Fame in Cleveland Ohio.  That have been playing since 1978, meet the eligibility criteria for induction, and have made unique contributions to the music industry (particularly in the field of alternative rock).  Many major bands playing today were influenced by them (including major names like the Barenaked Ladies, Korn, Garbage, Gwen Stefani, Pink, Dido, and The Scissor Sisters).

The post-punk/new romantic era was an important period in pop music history, and Duran Duran was one of the most significant bands to emerge during that time. Obviously the band's contributions in terms of music videos and fashion are quite significant, and there's plenty of press and many awards documenting that. But at the end of the day, we believe it comes down to the music. The band created -- and continues to create -- great songs and albums. Their sound defined the early '80s, but they've never been content to live in the past.  We think it's also important to note that Duran Duran is and has always been a genuine functioning band. They write and perform their own music, and even though they've worked with some of the greatest producers in pop history, the drive behind the music has always come from within the band. They're not afraid to take risks, and the artistic payoff of those risks is evidenced in their albums.

In comparing Duran Duran to 17 Rock and Roll Hall of Fame inductees from roughly the same era**, we have discovered the following:
In looking at a sample of 17 Rock Hall inductees (who played in the same era**):

**Out of the 10 who made the list of best selling artists, Duran Duran sold more records than four of those inductees

**Duran Duran is way above average in Top 10 singles worldwide, excepting four artists with >100 (Queen, Abba, U2, Madonna removed--63 for Duran Duran, 27 for remaining 13 of sample).

**Notes:  Era includes artists from 1967 to the present, and who played or had albums released >= 20 years, Sample included the following bands:  Genesis, Tom Petty & the Heartbreakers, Queen, The Clash, ZZ Top, The Stooges, Abba, Run D.M.C., The Police, Black Sabbath, R.E.M., U2, The Pretenders, Talking Heads, Blondie, Fleetwood Mac, Madonna.  Sources:  List of Best selling artists of All time, at Wikipedia, http://en.wikipedia.org/wiki/List_of_best-selling_music_artists#cite_note-bbcayumi-162 (outside sources listed on this site).  Discography for each artist in this sample also from Wikipedia:  official sources for numbers listed on that site.