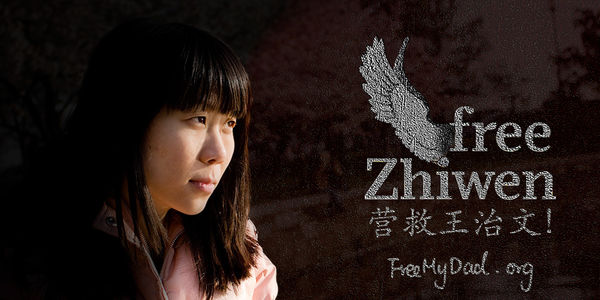 My dad, Zhiwen Wang, was illegally sentenced to a 16-year prison term for practicing Falun Gong. Little news about him and his condition filters out of China to me and my family. I know that my dad has been tortured in attempt to make him renounce his belief in Falun Gong and its principles of truthfulness, compassion, and forbearance. He has never given in. I want to rescue my dad and bring him home to stay with me in America where he will be safe.

I hope all kindhearted people of the world will help me to free my father from the Chinese prison controlled by the Communist regime, so that he can freely believe what he wants to believe and I can see my dear father again.

Your signatures and voices are rays of light piercing the darkness in China that runs so rampantly beneath the surface. Every petition entry is a step closer to my dad's release and the end of the persecution of Falun Gong.

Thank you for your support!
Danielle Wang

Whereas,           Falun Gong (also called Falun Dafa) is an ancient and peaceful practice of meditation and self-improvement from China which is guided by the principles of Truthfulness, Compassion and Forbearance.

Whereas,           Fearing that the popularity of Falun Gong was a threat in his atheist state, the Chinese leader in 1999 declared Falun Gong illegal and launched a nation-wide campaign to eradicate the practice through violence, torture, and brainwashing.   Several thousand Falun Gong adherents are known to have been tortured to death.

Whereas,           Among the first Falun Gong adherents to be imprisoned in the persecution was Zhiwen Wang, father of American Danielle Wang.

Whereas,           On December 27, 1999, Zhiwen Wang was sentenced in a show trial to 16 years in a Chinese prison solely on the basis of his believe in Falun Gong and its moral precepts of Truthfulness, Compassion and Tolerance.

Whereas,           Zhiwen Wang has been imprisoned for the past eight years and is currently held at Qianjin prison, where he has been repeatedly tortured and deprived of sleep and food.

Whereas,            The persecution of Falun Gong adherents like Zhiwen Wang is a violation of both the Universal Declaration of Human Rights and the Chinese constitution, which guarantee freedom of belief.

Therefore,         We hereby call upon the Chinese president Hu Jintao to immediately release Zhiwen Wang from detention in China and allow him to be reunited with his daughter in the United States.