On January 6, 2010, in blatant disregard for the safety of the Sea Shepherd Conservation Society crew, the Japanese whaling vessel Shonan Maru No. 2 attempted to sink the Sea Shepherd vessel Ady Gil off the coast of Antarctica.

But I join the chorus of voices that ask the Japanese whale killers to stop their deliberate attempts to ram and sink our vessels, and kill our crew.

For anyone who has seen the video clips, and millions upon millions of people have, it is clear that the 500 ton Shonan Maru No. 2, aimed at high speed for the 16 ton Sea Shepherd speedboat Ady Gil, and at the last moments, to make certain of a collision, steered hard to starboard to deliberately cut our vessel in two.

There is not a doubt in anyone%u2019s mind that if one of our crewmembers had been in the front part of the Ady Gil when it was struck, they would have been killed instantly. It was a miracle that most of the crew, who obviously had no idea they were about to be rammed, were out on deck securing equipment when the Shonan Maru No. 2 slammed into them.

In an incredible display of cold and calculating violent illegal action, immediately after ramming the Ady Gil, the Shonan Maru  No. 2 directed its high pressure water cannons at the stricken Sea Shepherd mariners, whilst ignoring the Ady Gil%u2019s distress calls.

The Ady Gil has been damaged beyond repair, and after repeated attempts by Sea Shepherd%u2019s new ship the Bob Barker to tow the damaged remains of the Ady Gil to the nearest port to asses what might be salvaged, the vessel has broken loose from our tow lines yet again and we have been hit with the gut-wrenching realization that we have no other option than to let it sink. Fortunately we were able to remove all fuel and oils from the Ady Gil before it began to take on too much water, thus preventing a catastrophic leak into the fragile marine environment. Sea Shepherd notified the relevant marine agencies about the sinking Ady Gil and has complied in full with all maritime requirements. All the while, the Japanese whaling fleet continues to ignore our calls for assistance.

This week the Japanese whaling business has sent undercover operatives to hire aircraft in Australia and fly illegally in Australian airspace to hunt for the Sea Shepherd ships, it has deliberately rammed and ultimately sunk one of our vessels off the coast of Antarctica, and it now seems clear that it has this week also focused an international cyber attack on our website to attempt to block us from putting out the truth about what happened and receiving donations from our supporters.

Sea Shepherd demands that New Zealand arrest the Shonan Maru No. 2 and its crew, and that the Japanese whaling industry repay the $2M in losses that resulted from the deliberate sinking of the Ady Gil by its ships.

These attacks are certainly a hefty financial blow to Sea Shepherd; we have lost millions of dollars as a result of the assaults upon us. But we will not flinch from our task to save the whales and the oceans in which they live. We will not pull back from our direct actions to save the whales in the Southern Ocean Whale Sanctuary, and we will not pull back from our projects protecting the seals, dolphins, sharks and tuna, despite the fact that our funds are have been so drastically reduced. We will go to our supporters, and with their help we will grow bigger and stronger. We will not hesitate in our duty to save the oceans from the mercenaries of profit and greed that seek to destroy the natural world. (Steve Roest, Sea Shepherd Jan. 14 ) 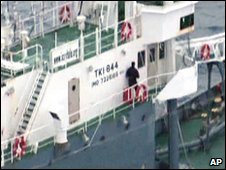 Peter Bethune on the Shonan Maru 2

A New Zealand activist who boarded a Japanese whaling ship in the Antarctic is being taken to Japan for questioning.

Peter Bethune, a member of the Sea Shepherd anti-whaling group, had wanted to make a citizen's arrest of the ship's captain for "attempted murder".

He has been detained on the Shonan Maru 2 since boarding it on Monday.

Japan has six whaling vessels in the Antarctic, where whalers and activists regularly clash during the hunt season.

Chief Cabinet Secretary Hirofumi Hirano told a news conference the country was preparing to bring him to Japan to be questioned under Japanese law.

''We would like to decide whether to file criminal charges against him under Japanese law," Japan's Kyodo news agency quoted Mr Hirano as saying.

Mr Bethune is suspected of illegally boarding the Shonan Maru 2 in the early hours of Monday morning by cutting through its protective netting.

He had said he wanted to arrest the ship's captain, Hiroyuki Komiya, for attempted murder, following a crash between the Shonan Maru 2 and Sea Shepherd's Ady Gil speedboat in January.

The whalers said the activists tried to tangle a rope in their propeller.

Mr Bethune also wanted to present Mr Komiya with a bill for the damage.

Sea Shepherd warned that any trial would be "a rallying point for an international campaign" against whaling.

Japan abandoned commercial whaling in 1986 after agreeing to a global moratorium; but international rules allow it to continue hunting under the auspices of a research programme.

It says the annual hunt catches mostly minke whales, which are not an endangered species.

Conservationists say the whaling is a cover for the sale and consumption of whale meat.

The BBC's Tokyo correspondent says few Japanese eat whale regularly, but many object to international pressure to stop whaling, which they see as part of the country's tradition.

(B.B.C News Wed. Feb 17th)
Sign Petition
SHAREShare this petition with friends!TWEETEMAILEMBED
Sign Petition
See more petitions:
You have JavaScript disabled. Without it, our site might not function properly.