Many people have been to New York City and have seen carriage horses going up and down the streest. You think it would be fun to take a ride on one, you think these animals love their job, you think they're well treated...you're wrong. Behind the secenes, these animals are over-worked, under-fed and and even beaten or sent to slaughter when they can no longer do their jobs. These horses are neglected and the city life has a harsh effect on them. Many fall victim to neglect and abuse such as the horse below...

There are several health hazards that affect these horses such as traffic, noise, exhaust, hard concrete, as well as the industry%u2019s proven unwillingness or inability to provide for horses. They often are prone to lameness and hoof deterioration because of long hours spent pulling carriages over rough surfaces. Horses have even collapsed while on the streets. In the heat there is a lack of water offered to them and overall safety is an issue that also puts them at risk. Horses can spook, causing crashes and injuries to both horse AND human.

When spooked, these horses risk darting out into traffic, running over people, getting hit by cars and even killing themselves and anything in their way (horses run from danger and won't stop untill they feel safe). If the horse mis-behaves or is unwilling to perform the task at hand, often, carriage drivers whip horses or, if the horse is putting people in danger, the animal is put down. 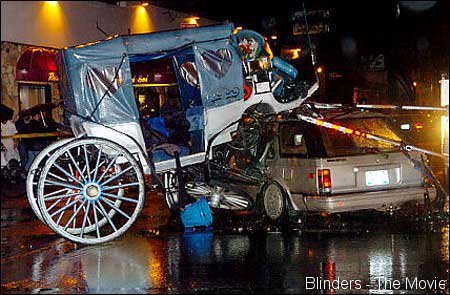 These poor horses have suffered enough. Since 1999 NYC carriage horses have been abused and it's time that abuse comes to an end. If you want to see the horses saved, please sign.
read petition letter ▾

Would appreciate you looking into the abuse of NYC carriage horses. Over the past couple of years, there have a great many of both horses and people who have been injured and even killed. These are are abused by their drivers and city life isn't well suited for these animals. They are whipped and beaten, under-fed and watered, have a lack veterinary care, live in poor conditions and are often sent to slaughter when found usless. The carriages and horses themselves are also a risk to human safty. When sooked, a horse could easily traple humans, dart into trafic and injure many people, including themselves. Since 1999 both horses and humans have been badly hurt by carriage crashesa nd horses spookng and mis-behaving in the streets. Horses  have also been electrocuted, escaped their drivers and have gotten lose on the streets, broken free from their carriages and have been hit many times by trafic.

Please, many of people love and care for these horses and would like to see limits set as to how these animals can be, and should be, treated. If the people who visit NYC and it's citizens knew how these animals are treated, most wouldn't dare even look at a carriage again. Equestrians and non- equestrians alike feel there needs to be change to how horses in NYC are handled and cared for. If you could take a minute of your time to think of ways to help these horses, it would be greatly appreciated.