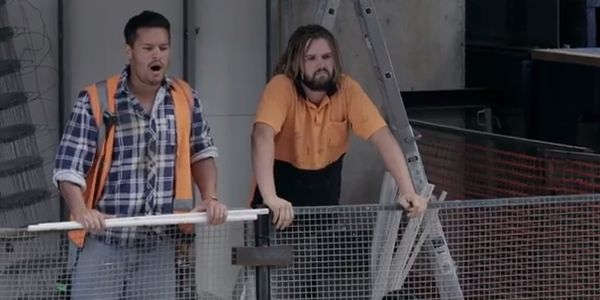 Have you seen Snickers' "You're not you when you're hungry" campaign? They show someone doing something out of character — until they eat a Snickers and then return to their normal self.

Snickers' latest commercial shows construction workers who are hungry and therefore "not themselves." It starts off asking "What happens when builders aren't themselves?" It then shows the workers yelling "empowering" things to women on the street:

“I’d like to show you the respect you deserve!”

“A woman’s place is where she chooses!”

“You know what I’d like to see? A society in which the objectification of women makes way for gender-neutral interaction free from assumptions and expectations.”

This commercial is problematic for a number of reasons:

2. The ad is offensive to men -- it presumes men are normally sexist street harassers when they "are themselves," i.e. aren't hungry and have junk food on hand.

3. The ad plays into the stereotype that all construction workers are street harassers, which isn't true. SNL and Lego have recently played into this trope.

4. Yelling aggressively at someone who's just trying to go about their day is the opposite of empowering, even if what's being said is refreshing for once.

Snickers is sending a confusing, stereotypical and backwards message that undermines the fight to end street harassment worldwide. Tell Snickers to apologize and pull this ad from the airwaves.