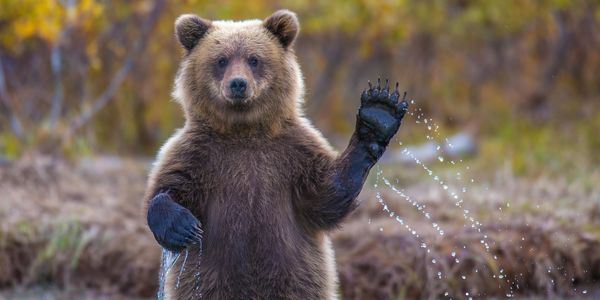 They Plan to Hunt Down and Execute This Poor Bear, But It Doesn’t Deserve to Die!

Two men were recently taking a footpath on Mount Peller, a mountain in the Italian province of Trentino, when a bear emerged from the woods and pounced on them. The bear quickly retreated, and the men were left alive, but obviously shaken. One of the men called the area "normally peaceful," implying that the attack was violent. But when an animal attacks, for reasons of hunger or fear or protecting its young, it is not being 'violent.' It is simply being an animal.

Unfortunately, the circumstances that led the bear to charge these men, such as fear or protecting its family, will not be investigated. The president of the autonomous area of Trentino has already signed off on the immediate murder of this bear, once plenty of time, money, and resources go into identifying it in the wild.

Sign the petition to demand that Maurizio Fugatti withdraw this warrant for slaughter, and that Trentino make a real plan to create safer conditions for humans and these bears to live in harmony!

The men left the hospital with scratches, bruises, and were told to use crutches for "several weeks." Do those sound like they warrant an execution? According to the area's Forestry and Wildlife Department, they do -- no matter what the reason for a bear attack on humans, the animal is murdered. Even if the animal is in pain or feels terrified. Even if the animal is coming too close to a suburb because its habitat and food sources are disappearing. Even if the animal is a mama bear protecting her babies. In fact, in 2017, a mother bear was killed in Trentino for exactly that reason. It's not fair to allow people to tromp through these animals' homes and then blame the bears for doing exactly what their instincts tell them.

The area has been a focus of bear population rehabilitation, which had dropped to lower than five bears around 2000 and has since thankfully surged to between 80 and 90 with conservationists help. If there has been a plan for 20 years to increase bear populations in this area, so we do not lose them forever, why have there not been parallel plans put in place to make sure that human interaction does not threaten them? After all, the presence of humans and our industries is the number one cause of species endangerment and extinction.

"Going into the woods from now on just won't be the same thing," one of the men reportedly said. Well, maybe that's a good thing. We should be treating a walk in the woods as encroaching on animal territory, instead of using these areas as our own personal playground.

Currently, scientists are working to identify this bear's DNA from samples taken from the men's clothes. But what if this time and technology was put towards efforts to protect bears and people. Wouldn't the presence of trained parked rangers, experts in animal behavior, and education for those who wish to safely visit nature be better for everyone?

Let's see if Trentino will really commit to helping wild bears. After all, the newly heightened presence of bears in the area due to conservation efforts has created a huge boost in tourism. It is in the province's best interest to keep these bears alive, and the people that admire and respect them safe. Sign the petition if you want Trentino to stop ruthlessly hunting this bear, and instead put real resources towards cultivating a safe and reasonable relationship between humans and wildlife!

Care2
They Plan to Hunt Down and Execute This Poor Bear, But It Doesn’t Deserve to Die!
SHARETWEET