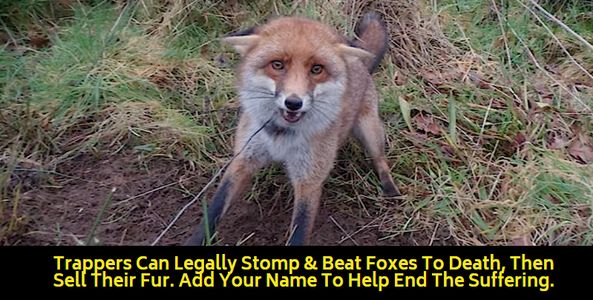 Heartless trappers are snaring and killing defenseless foxes for profit, even though fur farms have been shut down forever!

Add your name if you want to ban this cruel practice, NOW!

"A legal loophole allows a wildlife hunter to snare foxes, kill them and sell their pelts — even though fur farms are considered so cruel they are banned in Britain," reported The Independent.

One such ruthless animal killer is called David Sneade.

"David Sneade, who sells the fur to dealers in Sweden and the US, clubs the animals to death in a national park, in what critics condemned as a "grisly" business.

"He dismembers the bodies and stretches the skins on racks — and posts about it all on Facebook," according to the same source.

What kind of human being finds joy in doing this to living things?

The worst part is, he kills about 300 foxes a year.

And the cruelty they suffer is unspeakable.

"He uses the foxes' own brain fluid to preserve the pelts in a workshop described by investigators as "macabre", and leaves the skinned corpses out for birds to feed on.

"In a video taken by one witness, he "uses multiple brutal blows" on a still-breathing fox, before crushing it to death with his foot.

"Fur trappers snare and bludgeon animals rather than shooting them so their pelts are not spoiled by bullet wounds and blood," said the same source.

One eye witness described watching one of Sneade's videos this way:

"The way the fox was handled was disgusting and incredibly disturbing.

"The first smash round the head left it in severe pain and struggling for breath.

"He dropped the animal on the floor and stood on it to stop it escaping.

"It lay there struggling, staring me in the eyes before he smashed it round the head with a stick again."

There is no excuse for this kind of brutality.

The solution is clear: we must close the legal loophole used by wicked trappers like Sneade to get away with massacring these majestic creatures.

The Animal Welfare (Sentencing) Bill 2019-20 was presented to Parliament in February of 2020, sponsored by Chris Loder MP.

That's why we're asking him to lead a movement in Parliament that would put an end to the brutal murder of British foxes for profit.

Don't you want to live in a world where these lovely creatures are allowed to live free and happy in the wild?

Then add your name to ask Chris Loder MP to introduce legislation that would ban the snaring of foxes in the UK, once and for all!