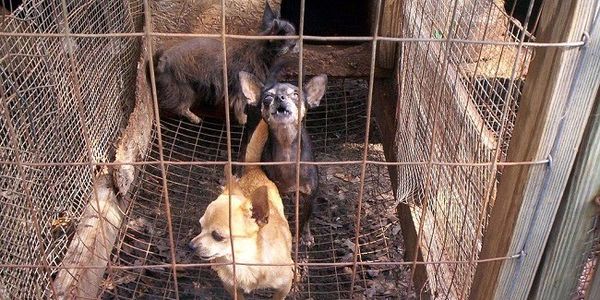 Shut Down This Puppy Mill That's Dangerous for Dogs and People

In 2017, a USDA inspector found two emaciated dogs at Double G Kennels, a commercial breeding facility (puppy mill) in Marion County, Iowa. Despite her condition, one of the dogs, a female shih tzu, was nursing six puppies. Other dogs in the facility were too close to heating sources, in risk of being burned. Nearly two dozen puppies were living in unsafe enclosures in which their feet and legs could slip through wire flooring.

In 2018, USDA inspectors returned to Double G Kennels and found a chihuahua with excessively long nails that impeded her ability to stand normally. Dogs in a whelping area had inadequate head space. The puppy mill was included in the Humane Society of the United States' "Horrible Hundred 2018" as one of the worst of these facilities in the country.

In 2019, multiple cases have been reported of canine brucellosis, a chronic and incurable disease that can be transmitted from dogs to humans. Ground zero for this outbreak has been determined to be Double G Kennels.

Canine brucellosis is highly contagious among dogs. It can cause reproductive issues including infertility and stillbirths in females, and sperm abnormalities in males. While people infected with the disease may experience mild symptoms like fever and headache, it can be far more serious for pregnant women, potentially causing miscarriages and premature births.

For these reasons, dogs that test positive for canine brucellosis are usually euthanized. Double G Kennels is closed and under quarantine while the dogs are tested.

Based on its history of mistreating dogs, Double G Kennels should never re-open for business. Please sign and share this petition telling the U.S. Department of Agriculture to permanently shut down this dangerous facility.