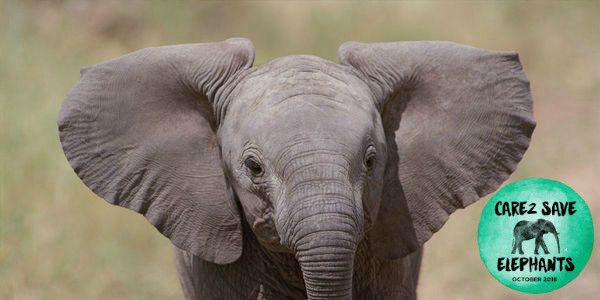 October is Elephant Awareness Month, a time where all of us must do our part to get as many people as possible doing something to save this amazing species and #KeepElephantsWild.

Sign this petition to become a Care2 Elephant Warrior and help us get over 15,000,000 signatures to protect elephants in the wild and free elephants in captivity

Elephants around the world are in decline. Each elephant species faces the brutal reality that their days might be numbered because human beings continue to threaten their very existence.

In Africa, the elephant — which once thrived and numbered in the millions — now suffers a daily slaughter that kills around 99 per day. These African elephants are being killed for their tusks, and at the current rate of poaching, many experts believe that they could become extinct by 2025. While poaching is the primary reason for the declining population, the encroachment of people into traditional elephant habitats has also started to play a larger role in their demise.

In Asia, the situation is even more dire. There are only 35,000-40,000 wild Asian elephants remaining, and and only 1,500 Borneo pygmy elephants, the Asian elephant's smaller cousin.

But the need to save elephants doesn't just end in the wild. There are currently 15,000-20,000 captive elephants around the world. The majority are used for cruel entertainment purposes in zoos, circuses, amusement parks, and TV/movies.

Before they're ready to perform they must go through an abusive training process that literally beats the wild out of them. In Thailand for example, the elephants go through "phajaan," which actually translates to "the crush." During the process, baby elephants are ripped from their mother's side and beaten until their spirits are reduced to nothing.

And then there are the zoo elephants like Chendra and Billy who live sad often solitary lives completely devoid of stimulus and affection. Elephants are highly intelligent, self-aware and social beings. In the wild, they live in large families of up to 100 elephants. They form powerful, intricate relationships with the members of their family. When one dies, they even mourn their dead. Despite this being common knowledge, many zoos keep their pachyderms in small groups of two or three, some even live alone. For such social animals, that amounts to a life of solitary confinement

Care2
Sign Up to Be a Care2 Elephant Warrior
SHARETWEET