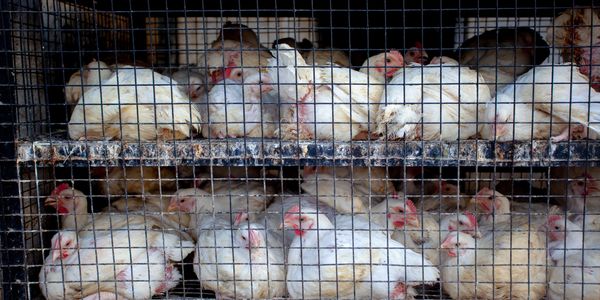 Chickens are dying in droves on transports trucks in these countries

Millions of chickens are boiling alive, freezing to death, or dying in other horrific ways on transport trucks every year in England and Wales -- and it's all because the poultry industry claims it can't afford to regulate the temperatures of the cramped containers or offer the poor animals food or water during grueling trips that can last up to 12 hours.

Obviously, those who are transporting these birds can't be trusted to prioritize welfare over profits.

Sign the petition and demand that the UK's Department for Environment, Food, and Rural Affairs (Defra) pass new, stricter regulations for the transport of live chickens!

Live animal exports are so dangerous and riddled with welfare abuses that the UK is attempting to ban them entirely throughout England and Wales -- and that's great news. But strangely, even though around one million chickens die during transports in Britain every year, live poultry exports won't be part of the ban!

Chickens are shoved into tiny, dirty plastic trays, stacked high on the backs of trucks -- their comfort couldn't matter less to those who pack them to the point of suffocating or trampling each other. They are denied food and water for their hours-long journeys. Temperatures in these shipping containers aren't regulated, nor are the journeys limited to mild weather months, so sweltering heat or bitter cold grip the birds as they struggle to stay alive. Many, many chickens do not survive the journey -- but for the poultry industry, this is seen as an acceptable, and even necessary, loss so that they can still rake in the profits.

Factory "farmers" would rather one million chickens die of heatstroke, cold stress, dehydration, or physical trauma than pay for trucks that are able to regulate temperatures. Or cut down on travel length to spare the birds extra hours of turmoil. Or take the extra time and expense to provide food and water. Animal abuse and food waste are never going to be more important than this greedy industry's bottom line. The UK government has attempted to negotiate for better animal welfare standards during live chicken transports, but the British Poultry Council (BPC) has said it is "totally opposed" to any and all of them. That's no surprise -- but it doesn't mean the fight can end here.

Sign the petition and demand that Defra stand its ground, and establish stricter welfare standards for chickens in England and Wales!