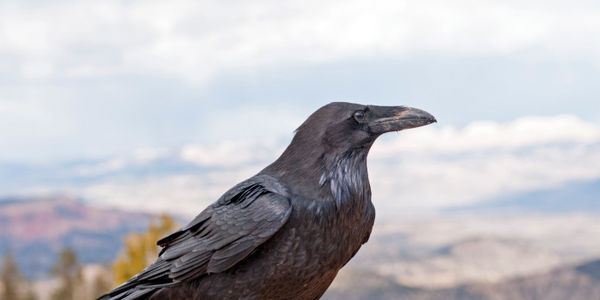 State of Idaho To Kill 4000 Ravens

MAY 27 UPDATE: The plan to kill these ravens has been scrapped for this year because of a delay in federal environmental permits. Jeff Gould of Idaho Fish and Game says the poisoning of these ravens will begin in the spring of 2015, which allows more time to convince them to reverse the plan entirely.

The state of Idaho has received permission to kill up to 4000 ravens, a bird that is protected by federal law. The justification for this killing is that ravens prey on the eggs of the sage-grouse, a bird which is finally being put onto the endangered list.

19 factors including mining and energy development, powerlines, drought and hunting have been identified as contributing to the sage-grouse's declining numbers. Predation by other wildlife comes in at #12.

Why is the highly intelligent raven being singled out for destruction, especially before other causes -- especially those related to human activity -- are addressed?

Ravens are among the most intelligent creatures on the planet. Please sign this petition and reach out in other ways to prevent this massive and unnecessary destruction.

UPDATE: On April 4, it was reported that the state of Idaho plans to start placing poisoned eggs in three separate areas of the state sometime this spring. Ravens are hard to kill with guns because they are so smart, so other methods are being used.

UPDATE: The cause of the ravens has been taken up by the American Bird Conservancy and several other organizations. You can read the letter sent on April 28, 2014 to Thomas Vilsak at abcbirds.org--put "ravens" in the search bar and it will come up. It is detailed and documented. I think this petition had a great deal to do with calling attention to this situation so THANK YOU, ALL OF YOU WHO SIGNED, for helping stop this planned slaughter.

An Open Letter to the Honorable Butch Otter, Governor of Idaho, and Virgil Moore, Director of Idaho Fish and Game:

As you can see by a quick perusual of the signatures on this petition, people around the world are aghast at your plan to kill up to 4,000 ravens. There is substantial evidence that ravens are not the main cause of the decline of sage-grouse populations. But perhaps more importantly, these are not your ravens to kill. They are migratory birds, protected by law.

The disruption and decline of their natural habitat account for much of the decline of the numbers of sage-grouse. Predation--not just by ravens but by others, including humans--is listed as the twelfth of nineteen factors. Why single out a single predator? Why ravens and not other predators? Why not address the first eleven factors?

Ravens are among the most intelligent creatures on earth, with elaborate social systems and deep bonds between flock-mates. The killing of a massive number of them will have dire consequences for the birds themselves and the eco-system in which they live, which, do not forget, includes humans.

If you can't reverse your decision to kill these birds simply because it is the right and moral thing to do, perhaps you can do it to save Idaho's reputation in the eyes of the world. It is highly likely that tourism in your state will decline substantially as word of this proposed slaughter spreads.

Please consider the well-being of the eco-system, these birds and your own economy and announce to the world that you have abandoned plans to kill these intelligent, social birds.