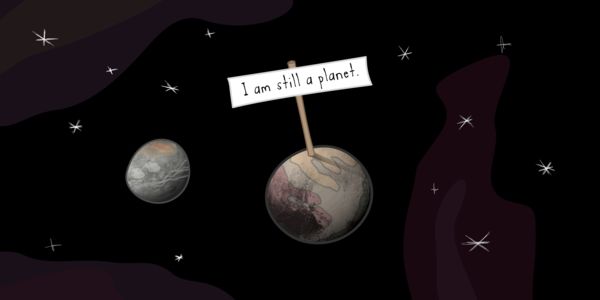 This is Pluto speaking here.

Look, I wasn't very happy when some scientists took away my "full planetary" status in 2006 without even consulting me directly. And I'm not alone.

I've been thinking about it – and this whole 'dwarf' designation has never really sat well with me ever since. And my moon Charon is not to thrilled about it either... because that would make her the moon of a dwarf planet, aka a "dwarf moon".

And then you gave me a number. What do you call it? "Minor planet designation". Wait a second. Let me look that up. Let's see here, what have I got, I knew I had it somewhere... "134340". That's it. "134340". That doesn't sound very special to me. One minute I'm named after a God. And the next thing someone has placed this completely arbitrary bogus number IN FRONT OF my name. Not after it mind you. BEFORE! Like this: 134340 Pluto. One-three-four-three-four-zero-pluto. To a planet, this is invective!

That would be just too confusing, argued the second debater, astronomer Gareth Williams, associate director of the IAU's Minor Planet Center. If you let Pluto stay, he said, you logically have to let the number of planets rise to 24 or 25, "with the possibility of 50 or 100 within the next decade" as more objects are found. "Do we want schoolchildren to have to remember so many? No, we want to keep the numbers low."

Planetary scientist Alan Stern, whose new New Horizons probe will reach Pluto next summer for a first-ever close encounter, wasn't there. But when he heard about the vote, he said, "every time there's a poll it turns out this way. The IAU have become largely irrelevant in this."

The organization may seem to count even less when you consider something Gingerich revealed during his arguments. He was there for the 2006 IAU vote, which came when most of the attendees had already gone home. Just 424 of the organization's nearly 10,000 members were present, and when the organizers offered the gathering the chance to reconsider Pluto's demotion, Gingerich said, "they voted not to vote again because they wanted to go to lunch, so that was the end of it."

Let me tell you something Professor Michael "How I Killed Pluto and Why It Had It Coming" E. Brown aka @plutokiller: I'm still here. And you don't just rename a planet that was named after a God of the underworld and think you can get away with it Scott free.

"There is a natural order to this world, and those who try to upend it do not fare well."

Not only is the term 'dwarf' discriminatory, it's also derogatory! The word 'dwarf' doesn't just refer to a small object; it also implies that its growth has been stunted.

And even well before this whole incident, some people were referring to me as the 'runt' planet in the solar system. Can you believe that? Runt indeed... I am way bigger than a lot of other orbiting bodies. I'd soon clear them out of the way. Runts don't tend to do that...

But what gives you the impression that I won't get any bigger? Planets evolve. Planets grow. Planets are growing all the time! Whenever a meteoroid or a comet hits a planet, it gets a bit bigger. That's what causes impact craters! See here? Look! Impact craters!

I don't want to be excluded from some of NASA's space missions just because of a simple misunderstanding!

So I'd like to set the record straight. I'm not a Kuiper Belt Object. I'm not a plutoid. I'm not a dwarf planet. I'm not a minor planet. And I'm certainly not "trans-Nuptunian"!

I am a planet. A full planet, okay. Not a half-planet. Not a pre-planet. I'm just a smallish planet. Just because my orbit happens to lie beyond the orbits of bigger planets does not make me any less of a planet, alright. I have five moons for Pete's sake!

A true dwarf is stunted and doesn't grow any more. But I'm not stunted! And I am still clearing my orbit! How do you think Jupiter got to be so big anyway? Do you think it just spontaneously formed like that? Way out here where I hang out, it just takes a bit longer is all... I mean, the circumference of my orbit is greater than those of the seven innermost planets COMBINED. Give an outer planet the chance to make a few more passes around the sun before you judge!

Calling me a dwarf planet is like calling a normally developing human foetus a "dwarf human"! Or that if you put a human baby into inter-stellar orbit, that it's not technically a human baby anymore "because it's orbiting too far away from its parents"!! Carl Sagan would probably turn in his grave if he heard that...

An object doesn't cease to be an object merely because of its present location. We all know that if I was orbiting much closer to the sun, if I pushed and shoved my way right in front of Mercury for example, I would NOT be called a dwarf planet anymore, would I? No. So you are discriminating against me BASED PURELY ON MY DISTANCE FROM THE SUN! (or worse, my proximity to the Kuiper belt)

It's just so not fair. Can I help it if Eris eggs around largely outside the Kuiper belt? No. What does that have to do with me? And I am bigger than him after anyway. So as far as I'm concerned, it's not really Eris's fault either. It's all those darn Kuiper belt objects. They're the ones that are confusing you!

If that weren't bad enough –you have the nerve to unfairly strip me of my full planet status without the proper authority– but now you want to label other objects in the solar system as planets. Not dwarf planets. Full Planets!

Is it costing you anything to call me a planet? Are you running out of tokens? What? What's the deal?

I think you've all forgotten who you're dealing with! I'm the original Planet X, not this other imposter! I'm just not going to stand for this "dwarf planet" designation any longer.

I AM PLANET NINE — ME!! The mysterious planetary body you are now calling "planet nine" is actually "planet ten".

Maybe I'll just wander off into another star system besides this one– one where I'm a bit more appreciated! It wouldn't be the first time either... or do you still believe that all those rogue planets didn't leave their orbits voluntarily, of their own free will?! HA! How would you like that?! How would you astronomers feel then, to have lost your first planet? I bet you'd be sorry!! So don't tempt me. Just don't. Ask Charon! She knows me all too well; I never bluff.

One wonders what's next! Am I to be further demoted to "giant asteroid" and later simply "asteroid" when you can't be bothered classifying everthing properly as it should be done?

Do particle physicists ever label electrons "dwarf electrons"? No. No, I didn't think so. Beta particle maybe when they stray off on their own, but never –I repeat never– a dwarf electron. The orbital shapes have nothing to do with it!

Do they say to the littlest hydrogen atom: "no, sorry, you're lacking a neutron, we're demoting you to 'dwarf' atom from now on"?

You know what they're starting to say here in the outer solar system?

"Never send an astronomer
to do a planetary scientist's job."

Right. So I'm going to clear this up for you once and for all –for all you bone-headed astronomers out there. If a round body orbits a star and an astronaut can walk on it and jump up and down a bit without floating off into deep space, then that's the exact moment when it goes from being known as a mere 'asteriod' to being called a 'planet'. Right then and there, in that exact instant. It's like an initiation ceremony for us planets.

Oh you want a more technical definition that that eh? Right-o then.

And as soon as those pesky little asteroids gain more predictable elliptical, separate orbits from one another –rather than just chaotic motions while co-orbiting the same star(s)– and begin to agglomerate, then they too will one day grow up to become fully-fledged planets.

By all means, go ahead and re-classify all the other asteroids as being full planets if you want, like Ceres, but don't you dare label me a 'dwarf' planet just 'cause I'm littler than average and so far away and you can't be bothered with re-naming that many new objects.