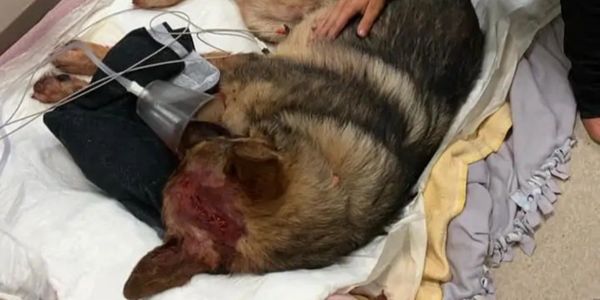 We all expect our animals to be fairly safe from harm when properly secured within our yards.

So, it's no wonder people online and from a town in Ohio are up in arms after learning about the tragic death of a German Shepherd, who was reportedly beaten with a baseball bat by a neighbor.

The neighbor had originally come onto the property where the dog was because he had been trying to capture one of his own chickens – a runaway chicken that had managed to get through the fence.

According to a brief report on Facebook, the dog had to be humanely euthanized because of the injuries he received from the beating. The suspect is Madison Township resident Charles Miller.

Reportedly, the incident began when he was chasing one of his chickens that had escaped into the yard where the German Shepherd was being kept. He opened the gate to go in and capture the bird, but did not close it behind him.

The dog, seeing the open gate and other chickens beyond it in Charles' yard, took the opportunity to run free and chase them. That is when Charles got out a baseball bat.

Responding to the scene, deputies from the sheriff's office found the German Shepherd bleeding and not moving. He was then taken by his owners to a veterinarian, who decided that the best they could do was put down the severely injured dog.

Since then, Justin Kreutzer, who seems to personally know the dog's owner, Regan Foster, has also posted an update on Facebook shedding more light to the incident.

Uploading several photos of the injured dog and the blood-filled car he was taken to the vet in, Justin said that Regan's pet, Ruger, was on the woman's yard when the neighbor's chicken came through the gate.

The chicken was reportedly unhurt, but the neighbor, the aforementioned Charles Miller, came onto Ruger with a baseball bat when the dog came onto his property.

Justin then recounted how the blows from Charles left Ruger's skull split open. The German Shepherd died at a little bit less than a year old.

The post has only been up for a few days but has already garnered 26,000 shares and over 12,000 comments from people who criticized the perpetrator.

Plenty of people have also extended their prayers for the deceased dog and his owners.

At first, Charles was charged with cruelty to a companion animal which is only a misdemeanor. However, his charge has been updated to a higher offense after an emergency meeting called by Butler County Prosecutor Michael T. Gmoser.

Together with Sheriff Jones and Middletown's Prosecutor Douglas Adkins, Prosecutor Gmoser upped the charge against Charles to serious physical harm to a comfort animal, which is a fifth-degree felony.

"I don't know how a person could beat a dog with a baseball and think it's okay. This is intolerable."

Meanwhile, one of Ruger's owners, Skylar Foster, has also been cited for not being able to contain the dog. He is set to make an appearance at the municipal court.

As the clamor to get justice for Ruger continues, Charles' wife shared her own apology with Local 12:

"I'm sorry. I'm so, so sorry. None of this should have happened. It really should not have happened. My husband is sick because of it. I don't know what else to say."