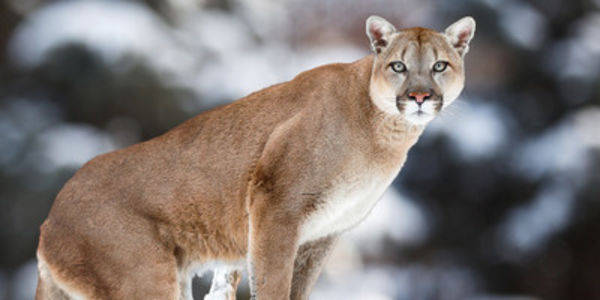 Accused of setting his dogs on a wounded mountain lion... and storming the U.S. Capitol building

Hunters, insurrectionists, and gun owners, oh my! What do they have in common? Well, there's at least one man who falls into all three categories: Patrick Montgomery of Colorado.

On January 6th, following completely fraudulent claims by a disgraced ex-president, Montgomery allegedly helped storm the U.S. Capitol building during an illegal insurrectionist movement — where video evidence suggests that he violently attacked a police officer. According to official reports, Montgomery stands accused of kicking the officer, aggressively wrestling him, and then even trying to seize the officer's baton, presumably to then use against him.

That this man, who seemingly is not averse to violence at all, would then be caught illegally shooting a mountain lion and setting his dogs on it is not a huge surprise. But it does mean we need to take such abuses even more seriously.

Montgomery is a huge fan of hunting and guns. Not only does he own his own wildlife-bloodied guns, but he's actually employed as a hunting guide in Colorado — meaning he's paid to help other people murder innocent wild animals. He was even convicted on felony counts in 1996 for armed robbery!

After his alleged participation in the U.S. Capitol rioting, Montgomery was banned from having a gun — but that didn't stop him. In violation of the terms of his pretrial release, he recently confessed to possessing a gun, and then using that firearm to go out and illegally shoot a mountain lion, itself a violation of state law because of his previous robbery conviction.

But Montgomery didn't just shoot this poor animal dead. No, he didn't allow it to be a quick death. He shot it out of a tree, and then set his pet dogs on it to viciously finish the job. The mountain lion almost certainly died a gruesome, painful death.

Luckily, authorities have acted quickly in response to Montgomery's deeds. He is now banned from all hunting, may not possess any firearms of any type, including having firearms located inside his home, and he's not even allowed to go anywhere outside his home other than court, medical care, or other pre-approved activities.

We're glad officials are holding Montgomery accountable. But his actions show a clear link between cruel animal murder and torture, and violence against humans. Tell the Colorado state government to increase penalties against people who harm animals, because clearly they're not safe around people, either!
Sign Petition
SHAREShare this petition with friends!TWEETEMAILEMBED
Sign Petition
See more petitions:
You have JavaScript disabled. Without it, our site might not function properly.

Care2
Accused of setting his dogs on a wounded mountain lion... and storming the U.S. Capitol building
SHARETWEET