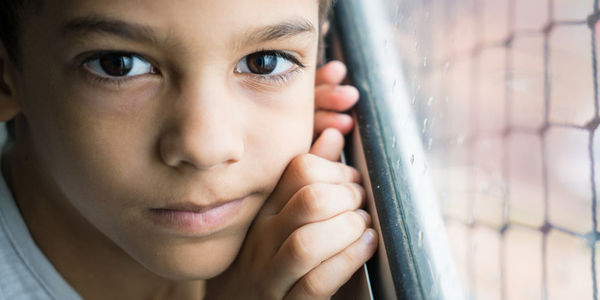 The U.S. is still locking children in cages where they are freezing, dehydrated, and terrified

Kids — children — are still in cages, locked up and separated from their families. That's the reality under President Biden, even though anyone with a soul was begging for the situation to change.

In fact, in a dusty area of remote Texas, Biden's administration just opened another detention center for Latinx immigrant children. It's not a new camp — the Trump administration created it back in summer 2019 — but had been dormant for a while. Now, Biden's team wants the facility to hold as many as 700 children, as young as 13 years old. Without their parents or other adult family.

This is heartbreaking. The U.S. government must stop holding children in detention camps. It is cruel and immoral!

The effects on children of being held in these types of prisons (because that is how they look inside and how they operate) are staggering and incredibly damaging. Most of us spent the year of COVID-19 feeling depressed, anxious, lonely, and scared. What we have experienced is NOTHING compared with small children, without their parents or other trusted adults around them, being shoved into barren metal prison facilities, where they will be warehoused for weeks or months on end.

If you've ever witnessed or personally experienced any childhood traumas in your life, reflect back on that. Remember the sense of helplessness, the confusion and fear, the betrayal and abandonment — and the urgent desperate wish that someone would help you. That is what these children are experiencing right now.

People who have seen inside these types of facilities say they are deeply inhumane, with little transparency for outside reviewers to monitor the children's health and well-being. Toilets are overflowing; building heat is unreliable even in the dead of winter; and children are suffering from dehydration.

When freezing cold swept through Texas in mid-February 2021, any child who complained about the conditions was sent into solitary confinement-style cells. Without any heat. In some cases, guards even threw out the children's blankets and intentionally turned on fans to make the freezing-cold cells colder.

One person in a similar Louisiana detention center said, of those locked in isolation during the bitter winter cold, "We were eight people dying of cold." They became so cold, their bones ached and several developed chest pains.

This type of detention-based approach is also extremely expensive for the U.S. monetarily. Our national debt is skyrocketing — and part of the reason is the ballooning cost of shoving children into jail-style detention facilities.

We have an obligation to act as moral leaders in the world, and this constitutes an obvious fail. We must do better. Sign the petition!
Sign Petition
SHAREShare this petition with friends!TWEETEMAILEMBED
Sign Petition
See more petitions:
You have JavaScript disabled. Without it, our site might not function properly.

Care2
The U.S. is still locking children in cages where they are freezing, dehydrated, and terrified
SHARETWEET