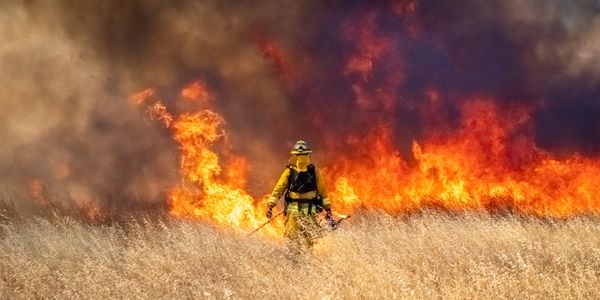 He fought California’s wildfires. Then, he was sent to ICE for deportation.

"If I do get deported, it's like getting sentenced again, for life."

Those are the words of Kao Saelee, a refugee from Laos who came to the United States when he was just two years old. At 41 years old, Kao has spent his whole life here. Then, as a teenager, he mistake just like teenagers do, and he foolishly participated in a robbery. That one mistake led Kao to spend the past 22 years in a California prison -- an unjust punishment that clearly does not fit the crime.

Despite this injustice, Kao was determined to do what he could for his fellow Californians. In both 2018 and 2019, as his state burned, Kao rushed to serve as an inmate firefighter, getting paid next to nothing while he risked his life to battle the flames.

Then, when Kao's release date arrived, his sister waited outside the prison to hug him and take him home to their family. They had planned a celebratory barbecue. But Kao would never make it to them -- instead, guards handed him over to a privately contracted agent who threw him in a van and took him into ICE custody.

Kao is now thousands of miles away from his family, sitting in Pine Prairie Ice Jail in Louisiana. He has no idea how long he will be there, but worse than that, when he is released, it will be to Laos -- a country that his family fled due to threat of persecution and violence.

Sign the petition and ask that once he is sworn into office, Joe Biden save Kao the hero from deportation and allow him to stay with his family in this country that they call home!

Kao and his family are of Mien descent, an ethnic minority in Laos. His parents bravely made the decision to escape with Kao and his younger siblings in tow when he was just two years old. They eventually landed in California, where a lot of pressure was put on Kao. Other than the responsibility of caring for his three young siblings, he also was tasked with looking after nine younger cousins. Facing bullying and ostracism at school, coupled with already high rates violence and poverty in his neighborhood and zero social systems in place to offer him support, Kao's story took a turn -- a turn that far too many refugee children and teens' stories take, through no fault of their own.

Once he was swept up into the criminal justice system, a system designed to gather up and disappear as many POC and Black folks as possible, things did not get better. Confusing legal proceedings left Kao totally vulnerable to coercion -- he was pressured into signing a plea deal and received excessive sentencing.

But even under these soul and body-crushing circumstances, Kao made the most of it. He found support systems, participated in rehabilitation programs, and took classes. When he qualified for California's inmate firefighter program, Kao was overjoyed. "It's hard work, but for me it was worth it to see the look on people's faces when they know they got people out there trying to help them save their land and their homes." He worked hard to save lives and homes from the devastating fires that only grow worse with each passing year.

Despite all this, California handed him over to ICE on the very day that he should have been reunited with his family, who have also suffered greatly in his absence. And Kao isn't the only one. The state of California voluntarily hands hundreds of prisoners over to ICE every year -- intentionally doing so at the end of their sentences, in order to exploit them and their labor as much as possible first.

There is no law requiring California to transfer prisoners who are 'eligible' for deportation to ICE. It is 100% voluntary and 100% cruel, especially considering that COVID-19 cases have ravaged ICE detention centers -- the one that Kao was sent to has already had 60 cases.

This is dangerous and completely unjust. With the Trump era coming to a close, so must these incidences of refugees and immigrants being treated with cruelty and inhumanity as their freedom and dignities are stripped away and families are torn apart. Ask Joe Biden to begin his term as President of the United States by pardoning Kao from deportation!

Care2
He fought California’s wildfires. Then, he was sent to ICE for deportation.
SHARETWEET