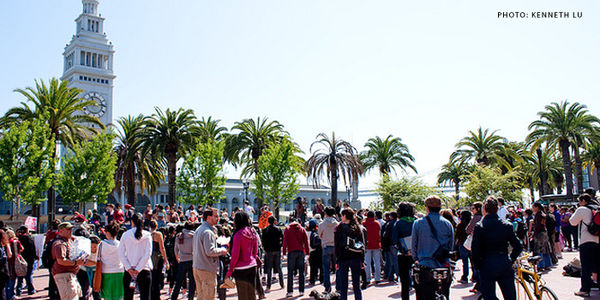 San Francisco residents know Justin Herman Plaza, or as my friends like to call it, JHP, is an excellent spot to relax and play. Situated near the beautiful Embarcadero, people go there to dance, skateboard, eat and relax. And every year on Valentine's Day, JHP is home to the San Francisco Pillow Fight, which is exactly what it sounds like -- thousands of people gather to have one giant pillow fight.

But the park's namesake is anything but innocent. In fact, Justin Herman ruled over the city in the 1950's and 60's as executive director of the San Francisco Redevelopment Agency. He was responsible for bulldozing much of the historically Black neighborhood, the Fillmore district, causing mass displacement of thousands of Black residents.

Herman made sure hundreds of beautiful Victorian homes and businesses were demolished. To make way to widen Geary Blvd., he evicted 461 Black-owned businesses and over 4,000 Black families.

Herman's offenses don't stop there: prior to leading the SFRA, he was head of the Housing and Home Finance Agency, where he specifically ensured the agency denied access to housing and loans to Black residents, except in Bayview and Hunter’s Point. As has been the case in many U.S. cities, the government created housing policies that aimed (and succeeded) at segregating Black people into less desirable neighborhoods.

There is no reason to honor this man with a park named after him.

Supervisor Aaron Peskin has expressed his support for changing JHP's name. Some have suggested renaming it after poet and civil rights activist Maya Angelou, San Francisco’s first black female streetcar operator. Others have suggested photographer David Johnson, who was Ansel Adam's first Black student and photographed the Fillmore's Black community in its heyday in the 1940s and '50s. His photographs are some of the only images of the Fillmore before Herman's cruel redevelopment.

Please sign this petition to supporting renaming Justin Herman Plaza, and suggest new names in the comments! Thank you!
Sign Petition
SHAREShare With FriendsTWEETEMAILEMBED
Sign Petition
See more petitions:
You have JavaScript disabled. Without it, our site might not function properly.