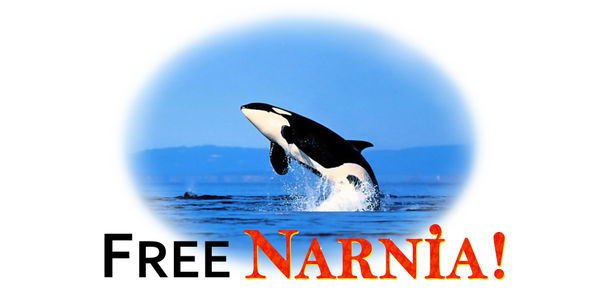 FREE NARNIA AND NORD! ABANDON THE IDEA OF ORGANIZING A SHOW WITH WHALES AND DOLPHINS!

Please, set free young orcas Narnia and Nord, and return them to their natural habitat!

Two young orcas, 7-year-old female Narnia and 6-year-old male Nord have been languishing in the temporary tanks at the VDNKh exhibition center in Moscow for almost a year. We are calling out to the owners of the Moscow Oceanarium and the Moscow Radisson Hotels to set free Narnia and Nord, and ensure their safe return to the ocean!

The potential for a SeaWorld-style, captive marine mammal entertainment industry has attracted the attention of the kings of Moscow real estate that are among the richest people in Russia. Mr. Zarah Iliev and Mr. God Nisanov have been financing construction of Moscow and Saint-Petersburg oceanariums – this is the first big investment into Orca and Dolphin shows in Russia. Sign the petition to urge Russia’s leading businessmen from investing in this cruel and inhumane business!

Narnia and Nord located at the VDNKh are in never-ending suffering. They are deprived of their mothers, grandmothers, sisters and brothers, sun, hundreds kilometers of everyday movement, live food - of everything they need to live. Because of giant size and mobility of these animals, the best oceanariums in the world are still a suffocating tight prison cell for them. It’s impossible to recreate and sustain orcas natural habitat in an oceanarium, even with the resources of a large country! Narnia and her imprisonment companion will be fated to a short life in the oceanarium (2.5-3 times shorter than in the wild), constant stress, noise of the compressors, diseases, chlorinated water, unhealthy food, mental pressure, desperation.

Please help us to stop this cruel treatment of cetaceans. Abandon the idea of organizing a show with whales and dolphins! This kind of business is quickly becoming a thing of the past in many countries of the world. On the other hand, socially and environmentally responsible businesses are gaining popularity. It’s not too late to re-equip the Moscow Oceanarium at the VDNKh, and improve the Saint-Petersburg Oceanarium project. They can become popular centers for recreation and marine education, without harming the oceans and their inhabitants!  Your actions towards release of Narnia and Nord will be greatly appreciated by the international community. We’re certain that these  steps will attract lots of customers to your Hotels Radisson Slavyanskaya, Radisson Royal Hotel Moscow, Radisson Royal Ukraine, Radisson Congress, Park Inn by Radisson! For our part, we will contribute everything we can to this.

To:  Mr. Zarah Iliev and  Mr. God NisanovWe signed:  Free young Narnia and Nord!  Abandon the idea of organizing a show with whales and dolphins!

Care2
FREE NARNIA AND NORD! ABANDON THE IDEA OF ORGANIZING A SHOW WITH WHALES AND DOLPHINS!
SHARETWEET