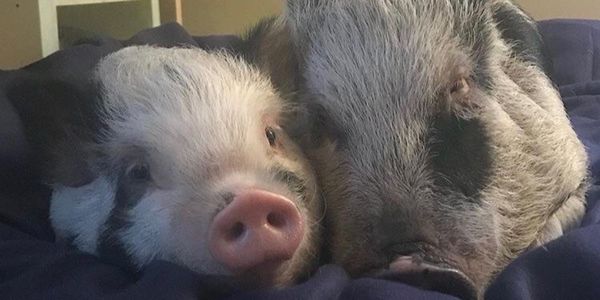 Keep Oliver and Emma with their Family

After living at our youngwood residence for almost 2 years, the borough has decided after a complaint was filed that the zoning doesn't allow "farm pigs/swine"
Oliver has been here since we moved here Feb 1st 2016.. Emma shortly followed after being rescued in October of 2017
The community and neighbors were aware of their warabouts since we moved in, considering the township supervisor lives across the street, and feeds them milkbones, Cheerios and all kinds of goodies on a weekly basis.

The problem arose after we had talked to the duplex neighbor and landlord about finishing off 3 separate areas of an unfinished fence.. which both parties agreed with that being ok...we wanted to create a safe and secure area for the pigs to play, while of course being supervised. They were never left alone, unattended.

After completing 90% of the fence project, the duplex neighbor had come outside and said she now doesn't want her gate finished. Mind you, we were paying for materials, and never asked for the money spent to be put towards rent. Now, the only area left open, that has direct access to the dangerous street that people do not obey speed limits.
After finishing 2 of 3 areas of the fence, the complaint was filed.

The complaint stated, "pig waste" was the issue. There was never any droppings left for anyone to complain about. So I called the code officer.. he had stated to me, the issue was the smell.
So after contradicting the issue, we then received a certified letter stating we had 20 days to remove the pigs.

Mind you- this was never an issue the whole first year.
Due to the duplex neighbors personal issues, we now feel singled out. After her divorce, she is now responsible for taking out the trash, and mowing the shared yard that she receives a rent discount for.
To extinguish the issues, we had offered to take out her trash, if put on the porch.. and to mow the grass with the ability for her to keep the rent discount.
She is clearly unwilling to cooperate, and unable to be a decent human being..

With that being said, we are asking for your support and dedication to keep our family together. If you're not aware, pigs are very smart and emotional animals. If Oliver and Emma have to be separated, it would crush their entire being. And if they would be separated from us, not only would we be devastated, but the pigs would feel lost as well..
🐷💕Thank you for reading and all your love and support 💕🐷

Care2
Keep Oliver and Emma with their Family
SHARETWEET