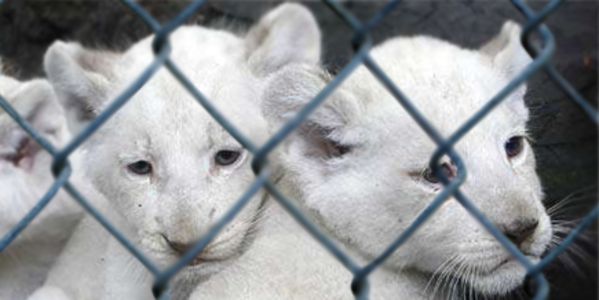 UPDATE: We created a Facebook page to post news on the animals of Luján. Like us and help us spread the word to save them https://www.facebook.com/pages/Kimber-and-Simba/566174990149314

Local authorities of the city of Luján, Argentina, found a “home zoo” when the police responded to a 911 call about weird noises in a house. Gastón Casano, who called the police, said he heard noises like roars and howls coming from the property when he was driving by. It isn’t a surprise that no one knew of the animals until now, since the closest house is half a mile away.

Sergio Martinez, the owner of the “animal sanctuary” as he told the police, lives in a small cottage in the countryside area of Luján, Buenos Aires, Argentina. The cottage is attached to a garage, where he keeps the animals. Among the species he has 5 dogs, 6 cats, and 12 endangered species: three tigers, a black panther, four white lion cubs, an artic fox, and three red wolves (one adult female and two pups).

The animals are kept in deplorable conditions, in cages where they can barely move. Their paws are injured, the result of standing on the cage floors, their eyes are infected. Most of the animals are malnourished and abused. The dogs and tigers have injuries in different parts of their bodies. The authorities suspect that the animals “best” treated could be for sale, like the wolf and lion cubs, the black panther, and the artic fox. It is prohibited to have such species as pets, but people who want “exotic pets” buy them on the black market.

Mr. Martinez has been asked to turn over his animals, but he has refused to do so. He won’t talk to the media either. Many accredited sanctuaries and institutions have offered to take care of the animals, but Mr. Martinez has refused, saying no one will take his animals from him and threatening to kill them if they try. But they won’t last much longer either, the police said that “it is a wonder they are still alive, they are starved, dehydrated, and many of them are too weak to even move. The biggest animals have wounds on their bodies and signs of abuse, they also present marks on their paws and teeth from trying to escape from the cages.” The endangered species should be taken to wildlife sanctuaries or natural reserves, where they can be rehabilitated and live peacefully in a natural and safe environment. The dogs and cats would be taken to El Campito Refugio, an animal shelter located in Buenos Aires, and one of the biggest in the country. El Campito Refugio is the only one of its kind in the world, taking care of over 130 invalid dogs among its 750 inhabitants.

Tell the authorities of Luján and Buenos Aires to secure the property immediately and make sure no further harm comes to these animals. They deserve to be rescued and live happy and free lives.

We will stand for these animals, and we will give them the voice they don’t have. We must take action and save them. Thank you.