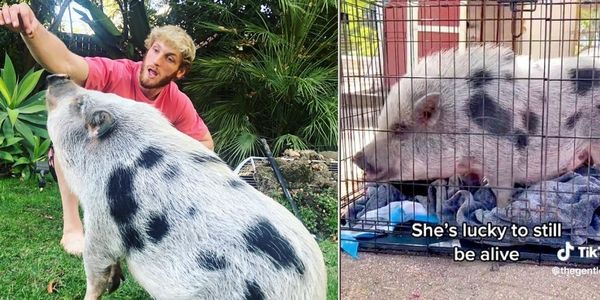 This Influencer Adopted a Pig, Then Left Her Behind. She Wound Up Nearly Dead.

Pearl the Pig is a beautiful, black-and-white spotted piggie who joined influencer Logan Paul's family 4 years ago. The YouTuber and Podcaster says he bought her from a breeder who promised she'd remain "mini" - but of course she grew into a full-grown adult!

Paul used to share photos and stories about her a lot on his social media channels. Then one day, two years ago, he stopped.

Now animal rescuers have found Pearl - abandoned - on a farm, allegedly lying next to a deceased sister pig. Sign the petition to demand that Logan Paul do the right thing by contributing a significant donation to help rescued pets and farm animals!

The rescue organization Gentle Barn has since taken Pearl in, with rescuers saying Pearl was "lucky to be alive." When they discovered her, she was battling a uterine infection so intensely, it nearly took her life. Her ears were ripped up, and her body was covered in wounds.

Logan Paul has since acknowledged that the piggie in question was, in fact, his former pet. Posting on social media, he wrote that he had rehomed Pearl when he moved away from the area, and she seemed happy at the time. But afterwards, she apparently was rehomed again "without [his] knowledge."

He has thanked Gentle Barn for taking sweet, innocent Pearl in and caring for her. And, he promised to "do whatever I need to aid in Pearl's care." So it's time for him to make a significant donation to the sanctuary that rescued his almost-abandoned animal.

Logan Paul's pig wound up nearly dead after he moved and rehomed her. He has the money and celebrity star power to make a difference by helping her and other animals at Gentle Barn. It's time for him to make a hefty donation to help rescued animals!
Sign Petition
SHAREShare With FriendsTWEETEMAILEMBED
Sign Petition
See more petitions:
You have JavaScript disabled. Without it, our site might not function properly.

Care2
This Influencer Adopted a Pig, Then Left Her Behind. She Wound Up Nearly Dead.
SHARETWEET