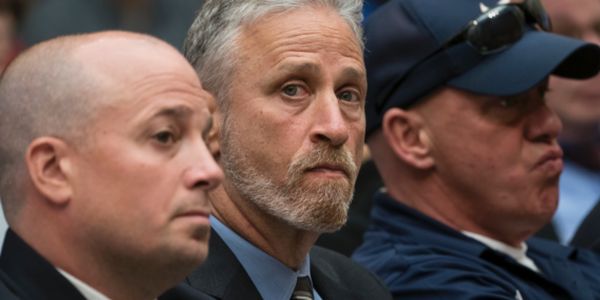 SUCCESS! 9/11 first responders will no longer have to battle Senate Republicans to get the health benefits they have more than earned!

On June 11, 2019 — 17 years and nine months after the attacks of September 11, 2001 — Jon Stewart sat before the House Judiciary Committee and pleaded with Members to finally do the right thing for 9/11 first responders and victims.

"They responded in five seconds," Stewart told the Committee, tearing up as he spoke. "They did their jobs, with courage, grace, tenacity, humility. Eighteen years later, do yours!"

Stewart was pleading with Congress to at long last permanently fund healthcare and treatments for the victims of 9/11 and the heroes who rushed to the scene of the worst attacks in American history, saving lives and initiating our nation's recovery, and remain plagued by health issues that the American government first denied and then tried to ignore.

It's time for our government to do what is right. Tell Trump and Congress that 9/11 first responders and victims don't need their empty platitudes — They need real financial support and healthcare. And they need it now!

Per CBS News, "Congress passed the James Zadroga 9/11 Health and Compensation Act in 2010, over opposition from some Republicans who balked at its $7 billion price tag. The act was reauthorized in 2015 for 90 years. But a portion of the law — the Victim Compensation Fund — was only funded for five years, through the end of 2020. The fund aimed to provide necessary financial support for the thousands who suffered serious medical issues, including a spate of cancer diagnoses, after the 2001 attacks."

The sad truth is that this basic issue of right and wrong would have likely been swept under the rug without passion and celebrity that Stewart brings to this cause. So called fiscal conservatives have made excuses while draping themselves in flag pins for nearly two decades as the heroes and victims of 9/11 have continued to struggle, suffer, and in far too many cases, die.

That must stop immediately.