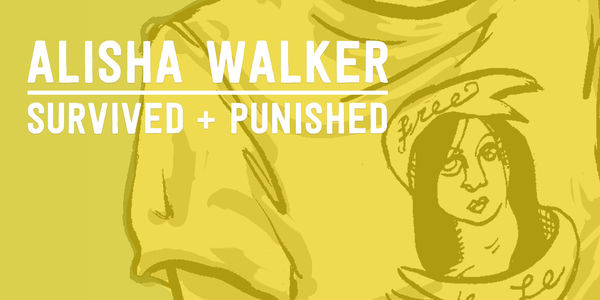 Alisha Walker Was Criminalized For Surviving - Demand Her Release Now!

Alisha Walker is a young biracial woman who is currently serving 15 years in an Illinois prison for defending herself against a man trying to harm her.

The fact that so many people, especially sex workers, survive horrible abuse and then are punished for how they survive is coming to light thanks to the prominent case of Cyntoia Brown. Cyntoia killed a man in self defense and was sentenced to 57 years in prison, but Tennessee Governor Haslam finally saw the light after a decade of advocacy on her behalf and granted her clemency.

Alisha Walker is no different. When she was 19, she and another sex worker were contracted to go to the home of a client and be paid $300 for half an hour of sex. When they arrived, the client demanded to have unprotected sex with them. Alisha refused to provide this unsafe service, and the client then punched her in the face and got a knife from the kitchen to attack her. She fought back and the women ran to safety. The client later died, which the women had no idea about. In fact, when Alisha found out, she burst into tears.

Alisha was just protecting herself and her friend — and that is not a crime. She was held pre-trial for 20 months and then her trial was full of disparaging rhetoric about sex work and her as a person. She was sentenced to 15 years in prison, even though no physical evidence was ever recovered. Sadly, this kind of thing happens all the time in the U.S. Whatever your opinion on the legality and morality of sex work, nobody deserves abuse, rape and murder for engaging in it. It's also worth noting that Alisha is biracial, since so often it is Black women who are disproportionately criminalized for acts of self-defense.

That's why I'm asking you to sign the petition asking Governor Pritzker to free Alisha. She doesn't deserve to be in prison.

You can follow along on FaceBook at "Justice For Alisha Walker" for updates on her case, her defense campaign is coordinated by the Support Ho(s)e collective. You can also support Alisha financially here. This fund will allow her family and community to visit her, get her basic needs met as well as help her save for future college courses.

Please sign on today as well as send a physical letter or make a phone call to Governor Pritzker. He needs to know that the public thinks it's wrong that Alisha and her friends and family are suffering just because she survived.
read petition letter ▾
Signatures will automatically be sent to Governor Pritzker's office electronically. For more impact, you can send a separate email to this address (GovernorsOffice@illinois.gov_ or a physical letter to this addres:

Below is some suggested language courtesy of the Justice For Alisha Walker Defense Campaign:

I am writing today to express my support for Alisha Walker's Appeal for Clemency.

On Feb 11th, 2016, Alisha Walker was sentenced to 15 years in Illinois state prison for refusing to be killed or to allow her friend to be killed by a man who held a knife against them, threatening to kill them, and refusing to allow them to leave his home. I urge you to please take the time to review the facts in Alisha's case.

I believe the facts will show that she should be released from Decatur Correctional Center Immediately. Thankfully, a groundswell of support is forming, made up of family, friends and advocacy groups who believe very strongly that no one is disposable, and that no one should be denied the right to self-defense based on their identity or work.

You can bring her home to this loving and supportive community, please do the right thing.