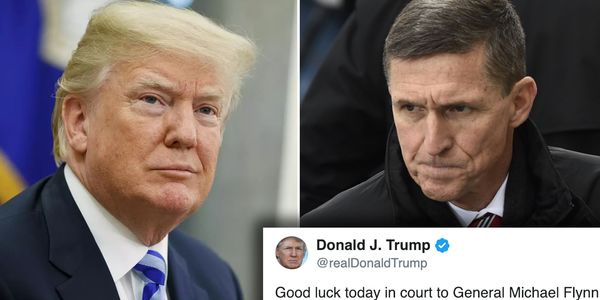 Whether or not Trump knew that Michael Flynn was working on behalf of the Turkish government when he hired him as National Security Adviser remains to be seen, but regardless, the president — like the rest of the country — knows now. That is why it is especially uncharacteristic for a president to publicly show support for a confessed criminal who used his government position to support a foreign nation at the United States' expense.

Uncharacteristic for all presidents but the current one. Trump has called witnesses who tell the truth "rats," and praised crooks like Roger Stone who have refused to tell prosecutors the truth, dangling pardons to entice them to continue lying for him.

With Flynn, Trump has been especially persistent in his attempts at witness tampering. Trump first teased that he would pardon Flynn in March and then, even after he had confessed to lying to the FBI about his connections to foreign powers, Trump continued to tweet praise for him publicly and signal that his disgraced former national security advisor could find favor with him — and thus a pardon.

It goes without saying that such a move is not only inappropriate but illegal as Trump tries to sway a confessed criminal and witness to his own crimes. The only reason Trump has not yet been charged is because he is president — but in the United States of America, no one should be above the law!

We, the undersigned, call for Trump to be prosecuted for this transparent attempt to tamper with a witness and obstruct justice to cover-up his criminal enterprise.

Prosecutors must act now to protect the integrity of our institutions and the rule of law. If they do not stand up to this reckless president now, no one will.