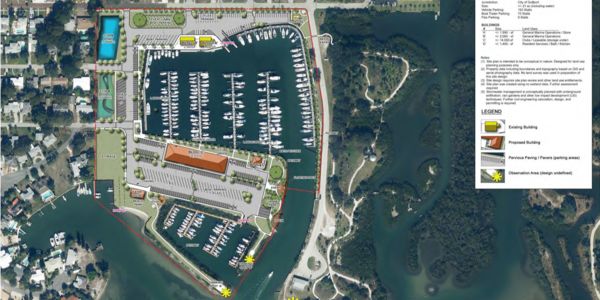 Talk to the residents about the Marina's future before you bulldoze!

The City of Gulfport, Florida, developed a concept plan in 2016 that would tear down the Boca Ciega Yacht Club, Lions Club, and Gulfport Yacht Club, and build a large, multipurpose building in the south parking lot of the marina as shown in the image above. The clubs would share use of this building. The plan was vetted at one public meeting in 2016 and was not well received. Now the city wants to move forward with the plan.

Join a group of residents called "Friends of the Gulfport Marina" who are asking the City Council to require more constructive public engagement about the future of the Marina. We aren't against change, but we do want to help shape that change so it meets the needs of our community.

Our letter to the City Council is below, followed by our summary of the issues.

We have delivered our letter to the City Council, but if you agree with our thoughts, please sign on anyway!

We, the undersigned residents of Gulfport, are referring to ourselves as "Friends of the Gulfport Marina." We thank you for reversing the eviction of the Boca Ciega Yacht Club (BCYC) and continuing their lease while refining plans for the future of the Marina. It is wise to move slowly before destroying public buildings without a complete plan and financing in place to replace them.

We believe that making changes to the marina could be beneficial to many stakeholders; however, we also believe that such changes are optional--not critically required--at this time. We also recognize that if funding comes to the city for infrastructure improvements, there could be priorities that are in competition with the marina for these funds.

We also recognize from the experience at the City Council meeting on April 6, 2021, that members of the City Council and members of the public are frustrated and have strong feelings about the process and decisions related to the Marina Concept Plan. There are many reasons for this, but it is clear that the current approach is not creating a feeling of shared problem solving, and could lead to decisions that may be regretted in the future.

For these reasons, we respectfully ask that the City Council direct the city manager to do the following:

We understand that the city would like to expedite decision making in anticipation of federal infrastructure funding that may come with deadlines. While a public engagement process does take time, we believe we can make progress quickly. Our "Friends of Gulfport Marina" group has already drafted a summary of the issues raised by residents to date, along with recommendations for the City about ways to proceed. These materials are attached to this letter.

We, the undersigned residents, plan to continue to work as the Friends of the Marina to find paths forward that could address all of the stakeholders' needs. We very much want to do this as a partner with the City of Gulfport.

Friends of the Gulfport Marina

At the following meeting of the city council on April 6, 2021, many residents spoke against the decision and about the lack of clarity, consensus, and funding for the concept plan. The council voted to direct the city manager to rescind the eviction and allow BCYC to lease the building month-to-month, while moving forward to refine the concept plan.

Brian, Alison, Paige, Judy, and Mary, all residents of the Marina District, met to discuss how we might partner with the city on this project. We are calling ourselves "Friends of the Gulfport Marina." The following summarizes our discussion of the issues, the process, and our thoughts about how to move forward in a constructive way.

The Gulfport City Council and city manager have made a number of upgrades that have improved the appearance of our city and the marina. In particular, the new black fence and landscaping at the marina look great. We believe there can be more improvements to the marina.

We have heard these concerns

At the city council meeting and in our conversation, we have heard many concerns raised that should be fully vetted with the community to resolve. We did not attempt to propose a resolution at this time, nor are these in any particular order:

Benefits of the clubs to Gulfport

Effect on the clubs

Goals of the marina expansion proposal are unclear

Concept plan building spaces and use

Irreversible loss of ground-level buildings near the water

Care2
Talk to the residents about the Marina's future before you bulldoze!
SHARETWEET