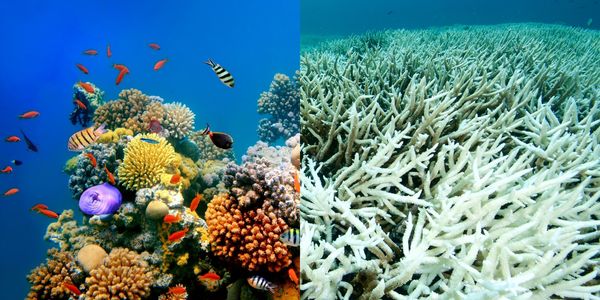 Ask any doctor and they'll tell you, sunscreen is an essential part of keeping your body healthy and free from sun damage or potential skin cancer. As summer approaches in the Northern Hemisphere, many of us will be slathering on even more as we take to various beaches. But the minute we take a dip into the water to cool off, we are inadvertently contributing to mass ocean death when the toxic chemicals in our sunscreen slip below the surface. Coral reefs are the main victims of these poisons, and if we don't do something soon, we could lose them forever.

Coral reefs are not just beautiful, although their intricate, colorful stacks of coral polyps and the life that attaches to and lives within them are incredible to behold. They also provide vital resources to animals and humans alike. It's estimated that through tourism jobs, food sources, and coastal protection from floods, storms, and erosion, half a billion people depend on coral reefs to live. And even though coral reefs are found in less than 1% of the ocean, 25% of marine life like sea stars, crabs, sea urchins, and countless species of fish call them home.

But ingredients in our sunscreen are causing coral bleaching, a heartbreaking sight. Every different, vibrant color of an affected reef is turned to a ghostly gray. And it's not just aesthetically damaging -- this bleaching eventually causes the reef to die, and many of the fish, crustaceans, and ocean animals that used it for shelter and food die along with it. When this happens, animal and sea life populations plummet, and the vibrant ocean ecosystems are turned into wildlife graveyards. Two of the main culprits doing this are chemicals in some sunscreens called oxybenzone and octinoxate, though they aren't the only ones.

The solution is simple, and it already exists -- a combination of reef-safe mineral sunscreen options (usually containing zinc oxide and titanium oxide) and a ban on toxic sunscreen sales, especially in popular swimming and snorkeling destinations!

Costa Rica is a hotspot for summer travel, but they have yet to ban sunscreens containing oxybenzone and octinoxate! With over 50% of the world's coral reefs already dead, and scientists estimating that another 40% could be gone before we know it, there is no time to waste.

Sign the petition and ask that Costa Rica pass its own toxic sunscreen ban, now!