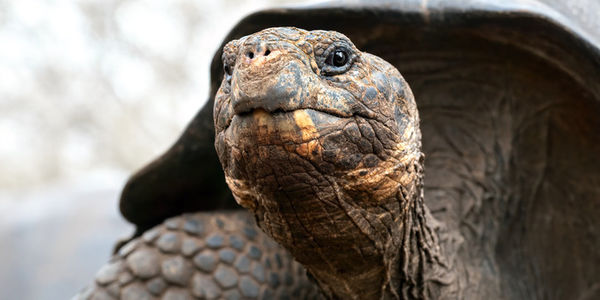 Demand Justice for Endangered Galápagos Tortoises, Butchered for Their Meat

The Galápagos Islands in Ecuador are home to upwards of 2,000 unique species that only live there - they are so rare and special, they actually can't be found anywhere else. This includes many species of giant tortoises, herbivorous reptiles that can weigh around 600 pounds and live up to 120 years. These animals are actually the namesake for all the islands, because Galápagos means "tortoise" in Spanish!

Fourteen of the giant Galápagos tortoises species are in trouble, with authorities listing them as vulnerable, endangered, critically endangered - and even extinct. Two hundred years ago, researchers estimate that approximately 200,000 Galápagos giant tortoises roamed their islands, enjoying the beauty of the nature and abundance around them. Due to poaching and other human interference, their populations have plummeted.

Killing these important creatures has been illegal for 89 years, since 1933. Sadly, that hasn't stopped people from hunting and butchering these beloved animals for their meat. The illegal wildlife meat trade is running rampant, and few animals are safe from its insidious effects. One year ago, authorities also discovered the decaying corpses of 15 other giant tortoises, also senselessly murdered for their meat.

Giant tortoises are so important, the Galápagos Islands are literally named for them! We can't allow them to disappear - and we can't allow vicious slaughtering to torment their communities. If these criminals get away with butchering endangered tortoises, other perpetrators are sure to follow suit.

Ecuadorian authorities must show that it takes the illegal wildlife meat trade seriously. They must find and prosecute the criminals who killed four rare giant tortoises.
Sign Petition
SHAREShare With FriendsTWEETEMAILEMBED
Sign Petition
See more petitions:
You have JavaScript disabled. Without it, our site might not function properly.