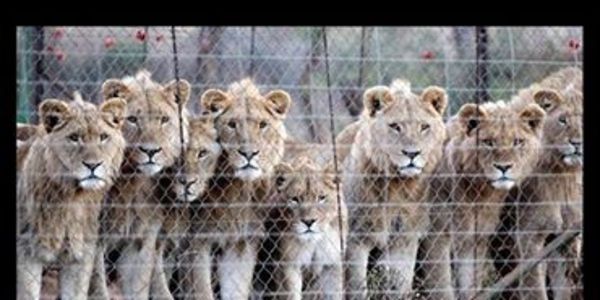 We hope that once you have read our message, you will be motivated to do what you can to bring the canned hunting of lions and other captive-bred predators in SA to an end.

WHAT IS CANNED HUNTING?

Canned hunting is the lion farmer and trophy collector’s substitute for real hunting. We define it as:
Any hunt where the target animal is unfairly prevented from escaping the hunter, either by physical constraints (fencing ) or by mental constraints (hand reared, habituated to humans).

On this definition, all hunts of captive – bred lions are canned hunts.

1. Numbers of lions being captive-bred in S.A. are growing by the day. Latest estimate; 8000 – nearly three times more than the number of wild lions in S.A. Reserves, that number less than 3000.

3. Lion farming does not fall under the Department of Agriculture but the Supreme Court has ruled that it has nothing to do with conservation, so it cannot be regulated by conservation officials either. Lion farming thus falls between two government departments. In consequence, captive predators bred for hunting purposes have no regulatory protection.

4. Lion Bones are sold to known Asian crime syndicates who pay lion farmers US$1,000 for a lion carcass, which is processed in Asia and then fraudulently sold as tiger bone cake for US$70,000 per carcase (US$1000 per 100 grams).

WHY SHOULD THIS INDUSTRY BE BANNED?

1. It is cruel. The whole business model is based on cruelty to helpless animals from birth until death. Bow hunting of tame lions is permitted in some provinces. Imagine the public outcry if farmers allowed hunters to come on to livestock farms and shoot sheep and cattle for sport?

2. It is causing a backlash against tourism to South Africa. Ethical tourists are already boycotting SA, causing losses to the legitimate tourism industry. These boycotts will surely increase over time.

3. It is illegal, but no one enforces the laws against such cruelty. The Animals Protection Act of 1962 covers cruelty to captive wild animals; not only cruelty to livestock and domestic animals.

4. It is a wasteful use of land and resources for no public benefit outside the narrow commercial interests of the hunting industry.

5. Private deals with rich foreigners give plenty of opportunities to unscrupulous soldiers of fortune for fraud and foreign currency swindles. Forensic audits need to be conducted across the industry, to protect the fiscus.

6. It is fraudulent at so many levels, right down to the sale of lion bones as tiger bone wine or cake, that have no proven medicinal value.

8. Already there are reports in the media about wild lions being killed in Boswana to obtain cubs which are then smuggled across the border in to S.A. Unscrupulous S.A. lion breeders will buy them to bring fresh blood in to their lion stock for genetic reasons, and to ward off captivity depression. This wholesale and unscientific killing of lions has long term effects on wild prides, destroying the core pride function. Research shows that it can take as long as seven years for a lion pride to re-establish itself after the death of the trophy male.

On www.cannedlion.org you’ll find all you need to know about canned hunting.

I have put all these email addresses for your convenience to copy and paste into your email, If you would like to write your own letters.

The Head of Department
Gauteng Department of Agriculture, Conservation and Environment
Email: lydia.onsongo@gauteng.gov.za

WHY HAS THE SOUTH AFRICAN GOVERNMENT NOT BANNED CAPTIVE LION BREEDING AND CANNED LION HUNTING?

This toxic industry is a liability in every respect. Even the much touted forex income from hunting is a myth. When one looks at the whole balance sheet of hunting, it causes a net loss of income and employment to the country as farmers turn away from producing food and wool in order to breed hunting targets. It is a wasteful use of land.

And it will contribute to the extinction of wild lions.

We are always told by captured conservation authorities that there is ‘no evidence’ that lion farming in SA is adversely impacting wild lion populations. ‘Scientific authorities’ apparently refuse to recognise evidence which is not contained in a ‘scientific’ paper published by a ‘recognised’ scientific researcher.

To my mind, this sacrifices common sense to dogma. Deliberately blinding oneself to important information, just because it is ‘anecdotal’ seems to be the very opposite of what open-minded intelligent scientific enquiry should be.

So read our case below, then decide for yourself whether or not there is ‘no evidence’ that SA lion farming is contributing to the plight of wild lions in Africa, who are, even ‘scientists’ accept, hurtling towards extinction.


Accordingly, in Decision 14.69 the COP adopted this regulation:

Parties with intensive operations breeding tigers on a commercial scale shall implement measures to restrict the captive population to a level supportive only to conserving wild tigers; tigers should not be bred for trade in their parts and derivatives.

So here is the question that screams for an answer: if CITES has banned tiger farming for trade, why has the farming of lions for commercial purposes not been banned? All the same considerations apply to both species.

There is the verbatim transcript in that report.

So there is no doubt that lion farming for canned hunting in SA is a liability, not an asset, to our national interests, but that it is promoted to a captured conservation service by an endless stream of hunting propaganda.

WHAT IS REGULATORY CAPTURE?

This is where big business sets out to control its own regulatory authority. Just as Wall Street controls Washington, so the hunting industry controls conservation services in South Africa.

Thus, acting as an arm of the hunting industry, Minister Edna Molewa reportedlyresponded to the proposal of the Australian government to ban the import of lion trophies by bringing diplomatic pressure to bear on the Australians NOT to ban lion trophy imports. What a ghastly parody of conservation are SA conservation services.

LET US NOT FORGET THE CRUELTY.

And quite apart from all the socio-economic, environmental and financial threats to the SA national interest, there is the cruelty, something that SA conservation services studiously ignore.

As Ghandi famously observed: ’the moral stature of a nation can be judged by the way it treats its animals.’

By Ghandi’s measure, SA conservation structures are morally bankrupt, run by officials who cannot even understand the revulsion felt by civilised people towards an industry whose whole business model is built around routine, barbaric cruelty to helpless animals.

Here, extracted from Hansard, are some memorable quotes from the debate on canned lion hunting, by civilised MPs - in the Australian parliament. Why are these ethical sentiments not expressed in the SA legislature?

I spoke in this place in May last year about the appalling practice of canned hunting and today I rise with the knowledge that my words back then are resonating increasingly in our community, in our parliament and around the world. People see this practice, as I do, as cruel and barbaric.

Many believe that hunting of endangered species has economic and conservation benefits for countries involved. This is simply false. A report written by Melbourne economist Roderick Campbell from Economists at Large showed that revenue from trophy hunting represented only two per cent of tourism in Africa and that this tourism revenue is only a small fraction, considering that it is $200 million whereas the economy is $408 billion. Sadly, there are only 7,000 to 8,000 lions left in captivity, 160 of these in privately owned canned hunting reserves.

I believe that canned hunting is another example of animal cruelty in which Australia is currently complicit by allowing the importation of hunting trophies. By not acting to prevent the importation of hunting trophies, we are effectively supporting an activity which is both cruel and unethical, a form of barbarism that has a direct impact on endangered species we have committed to protect.

Frankly, I call this sport un-Australian. Australians pride themselves on living by the creed of a fair go. Where is the fair go for these animals?

Trophy hunters are attracted to a situation where the animal is in an enclosed space and has some level of trust of human beings. I am not a person who supports hunting, but, to my way of thinking, this is quite a brutal and inhumane—

Interjection by an honourable member: Cowardly.

It is barbaric killing for macabre trophies… and medieval but, if people really want to do it, then at least we should have a level playing field. The lions have teeth and claws; so give the hunter an appropriately sized knife and fire up the lions a bit before the contest by not feeding them for a couple of days. That would be fairer.