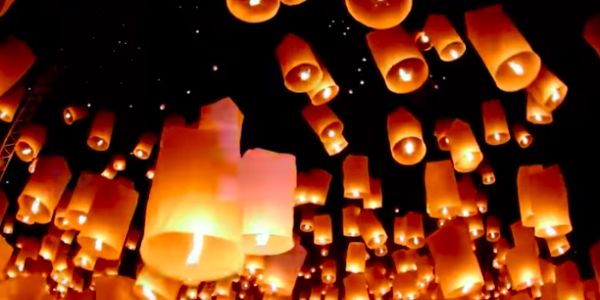 Sky Lantern Festivals Are Just Not Worth the Risk

The videos are magical — thousands of people gathered together as dusk falls, each releasing a paper lantern into the night sky. Over the past decade, these sky lantern festivals have become increasingly popular, with videos of them dominating Instagram, and one even being featured in the Disney movie "Tangled."

But as beautiful as sky lantern festivals are, they are a real danger to people, animals, and the environment — which is why we're calling for Alamo City Motorplex and the city of Marion, Texas to cancel the sky lantern festival planned for April 13.

It's not hard to imagine the inherent risk of sending an open flame flying into the sky. One simple Google search about sky lanterns will turn up story after story about fires caused by them. In 2013, a solitary sky lantern started a 500-acre wildfire in Washington that took 100 firefighters to extinguish. In 2011, 800 acre burned for three days in South Carolina because of a rogue sky lantern. And in India, 15 people suffered injuries after a sky lantern landed on a building.

But even if every lantern lands safely without causing a fire, the lantern's remnants still pose a risk to pets and wildlife. In one instance, a foal was so spooked by a lantern that it ran through a fence. It was so badly injured, it had to be put to sleep. In another case, an owl died after getting tangled in a fallen sky lantern.

These days, many sky lantern companies — like Night Lights, the company behind Texas' upcoming festival — claim to have 100% biodegradable sky lanterns, made from rice paper, bamboo, and natural fiber string. The problem is that these materials don't biodegrade right away — and the damage they can do in the meantime is grave. Night Lights also claims to have lantern chasers, people who "literally chase lanterns from the moment they are lit" to ensure no lanterns are left behind. But once a lantern is caught in the wind, there's no guarantee how far it will fly away. And there's just no guarantee that these chasers will find every single lantern.

There's a reason sky lanterns are banned in 29 states, and there's a reason why sky lantern festivals need to end. Please sign this petition to demand the cancellation of the sky lantern festival at Alamo City Motorplex in Marion, Texas.
Sign Petition
SHAREShare this petition with friends!TWEETEMAILEMBED
Sign Petition
See more petitions:
You have JavaScript disabled. Without it, our site might not function properly.

Care2
Sky Lantern Festivals Are Just Not Worth the Risk
SHARETWEET