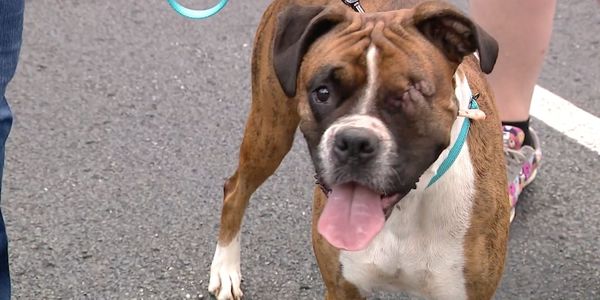 This man’s dog was shot in the head. He claims the dog did it to herself.

Jonathan George of Norwalk, Ohio recently called the local emergency number with a bizarre tale -- he claimed that his four-year-old boxer, Lula, had been shot in the head… and that she had done it to herself. George's ridiculous story was that he had trained Lula to retrieve his gun for him, and that in doing so, she had discharged the weapon into her own head.

George eventually caved, and admitted that he had accidentally shot the poor pup in the jaw when he was trying to unload his gun. "If that's true or not, or he pointed at the dog and squeezed the trigger, we don't know," said the Norwalk police captain. But what police do know is that George was drunk at the time, that he was handling a firearm, and that it all resulted in Lula losing an eye and gaining a ton of trauma.

Sign the petition and demand that Jonathan George be banned from owning a gun ever again!

Thankfully, Lula was rushed to surgery, and although she lost an eye, she is now healthy and healing. Although the rescue did say there are still bullet fragments in Lula's head, which may require more surgery, veterinarians report she is a social, happy girl with tons of love to give everyone she meets.

Her owner, Jonathan George, did the right thing by calling for help -- it absolutely saved Lula's life. No matter what truly happened that day, it seems clear that he did not want her to suffer or die.

George has been charged with a few misdemeanors, including animal cruelty and handling a firearms while intoxicatd. But the punishments for these crimes is jail time and/or fines. What really matters is that George shouldis no longer be able to own a firearm -- since he clearly is not responsible enough to have access to them.

The solution to this heartbreaking story is not locking George up, nor is it bankrupting him with fines -- both of those things just create more vulnerable, desperate members of society. The problem was that George was intoxicated and handling a gun, which put both him and Lula in danger. The solution should be to take away his access to these powerful weapons that he has proven he cannot be responsible for.

Sign the petition and ask that George's charges be shifted so that he is banned from owning firearms again!

Care2
This man’s dog was shot in the head. He claims the dog did it to herself.
SHARETWEET