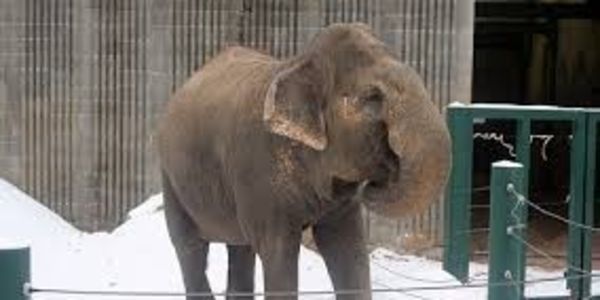 Lucy, the lonely Edmonton Valley Zoo elephant continues to live by herself in a barren environment and is obviously suffering and in poor health.

Elephants are highly social animals and to keep her alone and in the cold climate of Edmonton is cruel and inhumane.

The Edmonton Valley Zoo does not meet the Alberta Province's own Standard for Zoos and therefore should not have its permit renewed. Sign the petition urging the government of Alberta to enforce its own rules, and deny the Edmonton Valley Zoo's permit. Send Lucy to a sanctuary now!

We, the undersigned, are requesting that the Government of Alberta revoke (or not renew) the Edmonton Valley Zoo permit until they come into compliance with the Alberta Zoo Standards with respect to Lucy. Thank you

Why this permit must be denied:

Section III B. 1. of the Alberta Zoo Standards that state:

"All animals must be maintained in numbers sufficient to meet their social and behavioural needs (unless a single specimen is biologically correct for that animal). Exhibit enclosures must be of sufficient size to provide for the physical well being of the animal. All animal exhibits must be of a size and complexity sufficient to provide for the animal's physical and social needs and species typical behaviours and movements. Exhibit enclosures must include provisions (e.g., permanent and/or non-permanent features and structures) that encourage species typical movements and behaviours."

- Edmonton Valley Zoo is keeping Lucy, a female Asian elephant (endangered species) alone. This is a clear violation of the Alberta Zoo Standards. Even the zoo industry does not support keeping elephants, a highly intelligent, social species alone and recommends they should never be housed in groups of less than 3 individuals.

- Lucy's enclosure is too small and does not satisfy her physical or behavioural needs. Elephants have evolved to walk over long distances. Captive elephants, especially those that live in cold climate zoos, develop foot and joint problems because they are not able to walk long distances and are forced to stand on cold, hard substrates. In fact these captivity related ailments are the leading cause of death in zoo elephants. Lucy's medical records clearly show that Lucy suffers from these afflictions.

Section III B. 1. of the Alberta Zoo Standards also state:

"Enclosures must be of sufficient size and design to allow individual animals the opportunity to avoid or withdraw from contact with other animals in the enclosure or remove themselves from the view of visitors, using topography (e.g., large earth mounds, large rocks), fixed features (e.g., fences, walls, screening, shelter boxes), movable fixtures (e.g., brush piles, root balls), or other design methods."

-Lucy's indoor and outdoor enclosures allow her NO opportunity to withdraw from the view of visitors if she so chooses.

"Animals in areas where direct contact with visitors is possible must pose no danger to the public, be comfortable with human contact and under the direct supervision by zoo staff."

- Valley Zoo staff use a bullhook to manage Lucy and walk Lucy around the zoo, often in close proximity to the public. The bullhook is a tool of "discipline", utilized commonly in circuses. The bullhook, or ankus, is a sharp, pointed hook used for prodding and to discourage undesired behavior.

- Despite the zoo's claims that Lucy is too sick to move, her ability to be transferred to another facility (sanctuary or zoo where she can be housed in a better climate with other elephants) has not been fully explored as the zoo has stonewalled any efforts to assist with a thorough, unbiased evaluation.

- CAZA's "Position Statement" on Lucy issued September 28th, 2009 is irrelevant to AEP's duty to uphold Alberta's provincial zoo standards. The Ministry of Environment and Parks' responsibility to uphold zoo standards related to Lucy clearly supercedes the protectionist position taken by the industry organization Canada's Accredited Zoos and Aquariums towards one of its dues-paying member zoos.