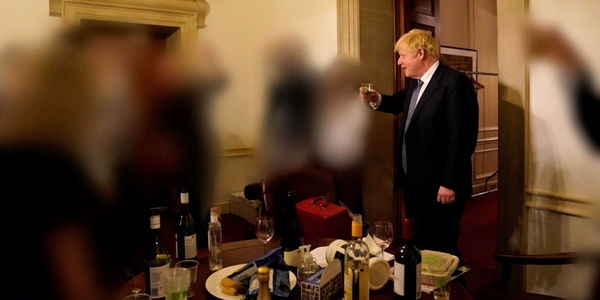 Millions of Brits Were in Lockdown for COVID. Boris Johnson Partied With His Staff.

COVID-19 claimed more lives in the United Kingdom than in any other country in Europe. Nearly 200,000 people living in the UK died from the devastating pandemic, with thousands more suffering long-term symptoms and health consequences from the virus, too.

As a result, governments implemented regulations to try and keep people safe. In the UK, for example, authorities enacted strict legal bans on indoor gatherings or parties. But while residents were doing their best to stop the spread and enduring strict lockdowns, their Prime Minister was not. Instead, Boris Johnson and his staffers were getting drunk, having parties, and ignoring all social distancing rules. In doing so, they openly disrespected the pain other Brits were experiencing - as well as violated the law.

A new government report, which paints a damning picture of the disgraced Prime Minister, makes it clear that neither he nor his staff cared much about COVID-19 spreading at all. In fact, members of his staff got so drunk that they brawled and abused custodial staff even during the nation's strictest lockdowns.

The report found over 15 events, including a large party the night before Queen Elizabeth attended her deceased husband Prince Philip's funeral alone, in accordance with social distancing rules. Leaked emails from a staffer show evidence of Johnson's principal private secretary asking people to bring more alcohol, and bragging to a colleague the day after one event that they had "got away with it." Meanwhile, everyone else in the country stayed isolated, legally unable to leave their homes or hug their loved ones.

Authorities are well aware that Prime Minister Johnson and his cronies have broken the law. As a result, they've issued 126 fines to the people involved. Yet Johnson is trying to gaslight police and the public: he has denied attending any of these events, explicitly lying to the public and elected officials about whether or not these well-documented parties took place.

Britons of all walks of life agree that this is unacceptable. In fact, a recent poll shows that two-thirds of people living in the United Kingdom think Johnsonhe should resign, given the report's findings. As Keir Starmer, leader of the opposition Labour Party, put it: "You cannot be a lawmaker and a law-breaker. It's time to pack his bags."

COVID-19 has upended almost every person on earth's life - except, apparently, for the Prime Minister and his staffers. There is no excuse for this behavior and it is an insult to the millions of people who have globally suffered. Boris Johnson must resign now! Sign the petition if you agree!
Sign Petition
SHAREShare With FriendsTWEETEMAILEMBED
Sign Petition
See more petitions:
You have JavaScript disabled. Without it, our site might not function properly.

Care2
Millions of Brits Were in Lockdown for COVID. Boris Johnson Partied With His Staff.
SHARETWEET