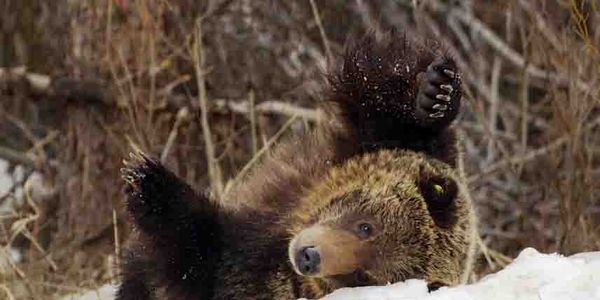 A young 4 Year Old Grizzly Bear (study bear #760) was killed by Wyoming wildlife officers that are supposed to protect endangered species, not kill them!

Bear #760 was a favorite in the Grand Tetons National Park, and I was honored to have photographed him multiple times throughout his young life as were many other photographers. He was well-known for his inquisitiveness, sense of adventure, and his peaceful nature. Even though he was never menacing and never aggressive, he was relocated by Wyoming Game and Fish into an inappropriate area 5 miles east Yellowstone. This area, according to WGFD's own report, has the highest density of Grizzlies in the entire Teton / Yellowstone region. As a sub adult, he virtually had no chance of survival there.

#760 was uprooted from the only home he ever knew when he should have been spending a time fattening up for winter hibernation. This relocation ended up being his demise. He was most likely forced out by mature adults for prime feeding habitat and eventually wandered to the small town of Clark, WY. He finally found some food....a deer carcass left hanging unsecured and low in a tree by a hunter......bad move in bear country. He instinctively claimed it his own. It was there that wildlife officers were called and ended up snaring and then euthanized this beautiful bear. Less than 3 weeks after his relocation and while he was still trying to establish his new unfamiliar territory. They claim he was too accustomed to people and they feared a bad encounter with a human.

This bear never had an aggressive bone in his body. He never caused any harm or damage. He was gentle, peaceful and as nice as any bear could ever be or you could ever want a wild bear to be. Wyoming Game and Fish maintains they exhausted their options to save this bear and that is extremely and ridiculously hard to believe.

Our mission is to find out why they killed this bear without giving him a proper chance to adapt, but more importantly, to prevent this from ever happening again.

Why would they put him in an area known to be heavily populated by other adult Grizzlies?

Why not relocate him to a more suitable location with an abundance of food he desperately needed for the winter hibernation?

Why didn't they give him more time to adjust to his new location or allow him to move on?

Why did they kill him!?

These are just a small sample of questions we want to ask the Director of WY Game and Fish.

Sadly, Bear #760 was betrayed by the very people that were sworn to protect him. Please sign this petition to help us make sure this horrific and completely unnecessary mismanagement of an endangered species never happens again.