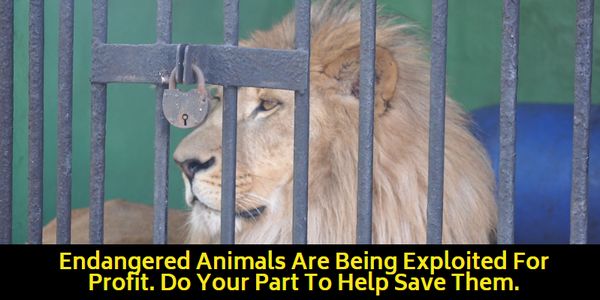 These animals need your help. Add your name if you want to put an end to this, once and for all!

"South African traders with China are illegally selling thousands of wild animals threatened with extinction and endangered, under the guise of legal exports, according to an investigation.

"Monkeys have been stolen from the wild, and together with cheetahs, tigers, rhinos, lions and meerkats, they have been trafficked to circuses, theme parks, laboratories, zoos and "safari parks", researchers found.

"Their report says at least 5,035 live wild animals were exported to China from 2016 to last year – "an extremely conservative" estimate – including chimpanzees and "a bewildering number" of giraffe, which "are also eaten in China"," said the same source.

Threatened and endangered species are being exploited for profit.

"Zoos, as well as brokers and wholesale companies, are behind the trafficking of animals caught from the wild, going to destinations that are often pure fiction; most permits are in breach of regulations, and their verification largely absent, meaning most wild animal exports in 2016-19 were probably illegal, according to the report authors.

"Regulation is "failing dismally, imparting a false sense of security for those who believe that the international trade in wildlife is justified and sustainable" while "such security is wildly misplaced and, far from contributing to conservation, the legal trade is one of the single biggest factors currently undermining conservation," they added.

The path forward is clear.

South Africa must abandon a fruitless strategy and implement something that will work.

They must punish the people trafficking threatened and endangered animals SEVERELY.

Don't you want to help end the suffering of these poor animals, many of which are threatened or endangered, who only have death to look forward to?

Then add your name to demand that South Africa severely punish animal traffickers!