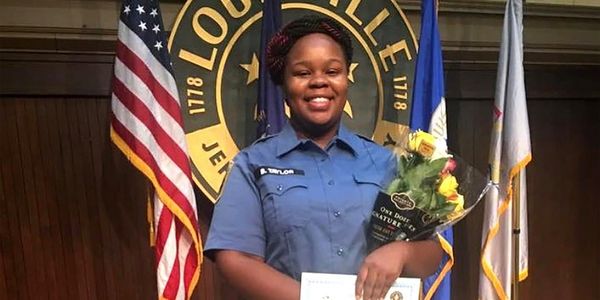 Justice for Breonna Taylor, Another Innocent Black Woman Murdered by Police in Her Own Home

*UPDATE* Devastating news. A grand jury will not charge Jonathan Mattingly or Myles Cosgrove in the violent murder of Breonna Taylor. Brett Hankinson was indicted for wanton endangerment, since his gunfire also traveled into neighboring apartments. No one in those apartments were killed, and yet these shots are the only ones that the grand jury decided were the most egregious. All of these officers sprayed Breonna Taylor's apartment with bullets, killing her. All of them sould be charged with murder. Keep signing and sharing the petition.

Breonna Taylor was asleep next to her boyfriend, Kenneth Walker, when three officers executed a "no-knock warrant" at her home, barging in through her front door with a battering ram without identifying themselves as police. Taylor and Walker awoke in fear. They had no idea that these intruders were police, or why they were violently storming the residence. Kenneth Walker, a registered gun owner, fired at the intruders once, hitting one of the men in the leg. The officers then sprayed the two innocent people with gunfire. Breonna Taylor was shot eight times and died on the scene.

Over two months later, no charges have been brought in the murder of Breonna Taylor. The names of the officers who entered her home that night are Sergeant Jonathan Mattingly, Detective Brett Hankison, and Detective Myles Cosgrove. Sign the petition and demand that they be charged with murder.

So far, the only repercussion these officers have faced was being placed on administrative duty. They are still working, still being paid, and still walking free. At the time of her murder, Breonna Taylor was working as an emergency room technician. Her mother said she had dreams of becoming a nurse. Dreams of buying a home. Dreams of starting a family. These dreams were stolen from Breonna Taylor, and the men who stole them from her dare to justify her murder.

The police raid on Breonna Taylor's home was related to an investigation into drug sales from a home over 10 miles away from where Breonna Taylor lived. The two suspects in the case had already been arrested, but the police claim they thought Breonna Taylor offered her apartment to receive and store drugs. No drugs were found in her home that night.

The police received a "no-knock warrant" from a judge, allowing them free reign to enter the home without knocking or announcing themselves as officers. These kinds of warrants were popularized during the 1970s and '80s when the war on drugs began -- officers serving warrants claimed that knocking gave drug dealers time to get rid of evidence.

Like the war on drugs, "no-knock warrants" and SWAT raids have disproportionately and violently victimized Black people. In 2010, Detroit police executed a "no-knock warrant" on the wrong apartment and killed little 7-year-old Aiyana Stanley-Jones who was asleep on her couch. In Ohio in 2008, police gunned down Tarika Wilson in her home as she held her 14 month-old son -- they had been looking for someone else entirely. These are two examples in a giant web of similar, heartbreaking instances.

Kentucky's Republican Attorney General Daniel Cameron was asked to serve as a special prosecutor for the case. A statement from his office claims that once investigations at both a federal and state level are concluded, they will take appropriate action. We urge AG Daniel Cameron to charge Sergeant Jonathan Mattingly, Detective Brett Hankison, and Detective Myles Cosgrove with the murder of Breonna Taylor. Please sign the petition today.
Sign Petition
SHAREShare With FriendsTWEETEMAILEMBED
Sign Petition
See more petitions:
You have JavaScript disabled. Without it, our site might not function properly.

Care2
Justice for Breonna Taylor, Another Innocent Black Woman Murdered by Police in Her Own Home
SHARETWEET