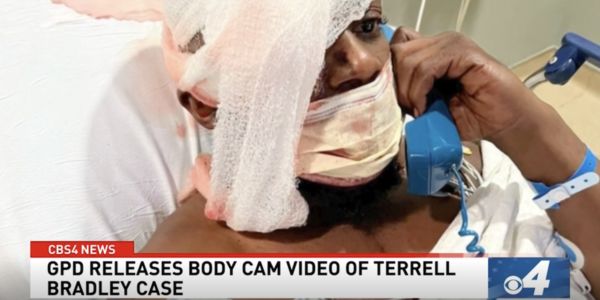 In July of this year, police in Florida decided to pull over a Black driver near Gainesville, Florida - and it ended with their dog tearing out one of his eyeballs.

For months, the Gainesville Police Department resisted calls from the public to share the bodycam footage from that night. And once the department finally did release the video, it still was clearly hiding something: the footage was obviously clipped and edited.

Sign the petition to demand a thorough investigation into this department!

During the night of the traffic stop, a police officer pulled over the driver, Terrell Bradley, claiming he had run right through a stop sign. Since the incident, however, officers have confessed that there is no stop sign at the given intersection at all.

Regardless, the officer ordered the man to exit his vehicle. Clearly frightened about being a Black man cornered in the dark by police, he fled, hiding in nearby bushes. As he left, his elbow nudged against the cop. Police considered this an instance "using force" against them, and after discovering contraband items in his car, the department's police chief decided to unleash the unit's K9 on Bradley.

And after the dog did find him, all hell broke loose. As Bradley begged for police to reign their trained dog back in, they refused. He begins to scream and shout as the dog attacks him, eventually shrieking: "He ripped my finger!" and then, later: "Your dog ripped my eye out! I can't open my ****ing eye!" He tells the officers repeatedly how his eye has been ripped from its socket, but they allow the mauling to continue.

Eventually, officers order the man to stand up, saying: "You can stand. Your legs work." Belatedly, they place a call to paramedics with Emergency Medical Services (EMS). The video shows one cop saying: "We need EMS now. The eye is out." And then, police went on to arrest Bradley.

And this is only the tip of the iceberg. A former police officer with this department recently sued Gainesville for widespread and systemic racism within the K9 unit specifically. The former employee details how staff there consistently referred to Black residents and officers using racial slurs. Courts are set to hear his case in spring 2023.

Obviously, this police department and its chief cannot be trusted with protecting human safety. They sicced an attack dog on a man they wrongfully pulled over. He has lost his right eye and has endured spinal leakage. Even worse, a police report actually manages to blame the victim for the mauling! Despite all this, after conducting an internal review, the department cleared the officers involved of any wrongdoing, saying they had conducted themselves "appropriately."

That's why it's crucial to have an independent investigation. Sign the petition to demand true justice, now!
Sign Petition
SHAREShare With FriendsTWEETEMAILEMBED
Sign Petition
See more petitions:
You have JavaScript disabled. Without it, our site might not function properly.