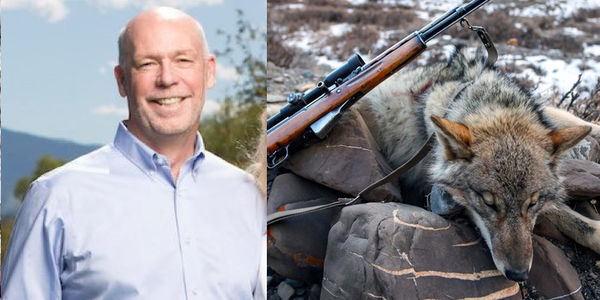 It was illegal to murder a gray wolf just north of Montana's Yellowstone National Park back in February. But that didn't stop one man. Greg Gianforte decided he was too big for the law and quested after a frightened member of the protected species during a hunt that ended with an animal in Gianforte's crosshairs, a trigger pulled, and a dead wolf.

Then, the illegal animal-hunter was so proud of his "work," he kept two trophies from the slaying: both the wolf's skull, and its fur pelt.

Even if a state governor thinks he's above his own state's laws, he's not above federal laws. Demand that Congress restore full protections for beautiful gray wolves, now!

One upon a time, these wild and majestic creatures roamed free. They covered much of North America's lands and had complex social ladders. Now, fewer than 6,000 gray wolves remain, living on approximately 10% of the vast lands they once called home. They remain one of hunter's favorite creatures to go after — and this has continued to put their very existence at risk.

Unfortunately, wolves are only moderately protected in Montana. While federal courts have upheld legislation stating these often-villainized animals must still receive federal protection, Congress has gone in the opposite direction. Ten years ago, members of Congress quietly removed wolves in several states (including Montana) from the federal list of endangered species. In doing so, they essentially left the safety of these animals up to the states.

Even worse, Trump had it out for the wolves. In 2019, his crooked friends launched an effort to strip gray wolves of all federal protection in each and every one of the "lower 48" states. Despite massive public outcry, they went through with their dastardly and deadly plan in 2020. Last fall, the U.S. Fish and Wildlife Service officially decided to revoke federal protection for nearly all U.S. wolves.

So when people like Governor Greg Gianforte think they can simply shoot and murder wolves with impunity, that's why. But we just can't let this keep happening to such a vulnerable species.

Sign the petition to demand that Congress return gray wolves to the federal endangered species list, and provide them with full protections again!
Sign Petition
SHAREShare this petition with friends!TWEETEMAILEMBED
Sign Petition
See more petitions:
You have JavaScript disabled. Without it, our site might not function properly.