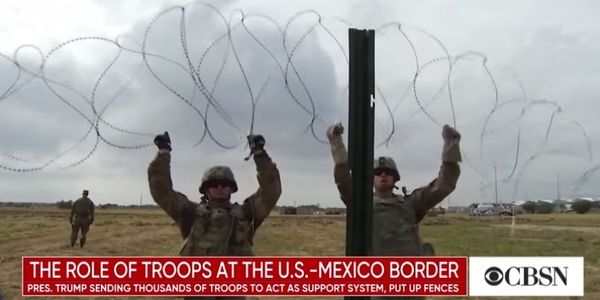 Thanks to Trump, Our Soldiers at the U.S. Southern Border Will Miss Thanksgiving

Operation Faithful Patriot ― the once dubbed military mission to the U.S. southern border was a sham from the beginning ― a brazen attempt by the Trump administration to gin up support from his base by fostering fear of the "dreaded" migrant caravan.

If you are wondering why you haven't heard about the caravan since the election, you aren't alone. The supposed national security emergency about which the president, his cronies, and Fox News couldn't stop blathering about before the election, has seemingly become far less of a crisis now that the election has ended.

But while the president's hate-filled, fear-mongering rhetoric has subsided (slightly), the soldiers that he imprudently sent to our southern border are still there. Building up to the election, Trump made a big todo about sending thousands of troops to the border to confront the oncoming caravan.

Apart from the hundreds of millions of dollars, the mission is expected to cost by the end of the year, Operation Faithful Patriot comes with another terrible cost. Our soldiers' deployment orders expire Dec. 15 which means that they will all likely miss Thanksgiving with their families.

There is no military justification for putting troops on our southern border. Despite what Trump says, there is no proof that terrorists are among the migrants hoping to enter the U.S. In fact, experts say that the caravan poses no real threat to American security. Yet, the President has decided to deploy more soldiers in Texas, Arizona, and California to fight unarmed, hungry and scared Central Americans than we have in Syria fighting ISIS.

The Trump administration has used our American troops as pawns and now they will be forced to miss out on one of the most important holidays of the year. For a president who claims to love our troops, he has a horrible way of showing it.

Tell President Trump to end this ridiculous deployment and allow our troops to go home. Sign the petition and demand that Trump let our soldiers spend Thanksgiving with their families, not on the border.
Sign Petition
SHAREShare With FriendsTWEETEMAILEMBED
Sign Petition
See more petitions:
You have JavaScript disabled. Without it, our site might not function properly.

Care2
Thanks to Trump, Our Soldiers at the U.S. Southern Border Will Miss Thanksgiving
SHARETWEET