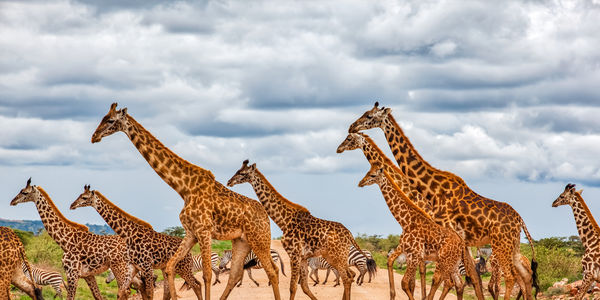 The International Union for Conservation of Nature (IUCN) is possibly the most important agency charged with protecting the world's animal species. Ostensibly, they work wholeheartedly with governments and other organizations to help create global policies that will conserve the earth's biodiversity. But a new expose by Buzzfeed suggests this isn't exactly the case and that serious conflicts of interest amongst members put their primary mission in doubt.

Demand that IUCN implement a complete purge of all members with links to the trophy hunting industry.

Let's take a look at the giraffe, the famous African herbivore that is instantly recognizable by its patchwork hide and long neck. Many people are unaware that the giraffe is in danger. According to a 2016 survey, there are less than 100,000 of them left in the wild. In fact, there are more elephants on earth than giraffes. Over the last generation, almost 40% of the species has been lost and their slow disappearance has been dubbed the "silent extinction."

Yet, as Buzzfeed reports, several of the IUCN's members seem to be playing both sides. One member runs the Giraffe Conservation Foundation (GCF), an NGO based in Namibia whose stated goal is to help protect its namesake. Yet, two of their largest sponsors are the foundation for the Dallas Safari Club, the largest hunting association in the world, and the Ivan Carter Wildlife Conservation Alliance, another organization with roots in trophy hunting.

How can an organization help save an animal if they work with, or even get funds from, sponsors that promote hunting them? There's a contradiction in missions that cannot be reconciled. For IUCN's part, they say its members are screened and are required to divulge conflicts of interests. Either that is not happening or the IUCN doesn't believe a member's receiving tens of thousands of dollars from a pro-trophy hunting organization is a conflict of interest.

Either way, it's inexcusable and there needs to be both a reckoning and separation between the IUCN and those organizations connected to any industry that promotes the killing or consumption of at-risk animals. Sign the petition and tell the International Union for Conservation of Nature to do the job it was created to do: conserve nature. Tell them to purge all members that profit from trophy hunting.
Sign Petition
SHAREShare With FriendsTWEETEMAILEMBED
Sign Petition
See more petitions:
You have JavaScript disabled. Without it, our site might not function properly.