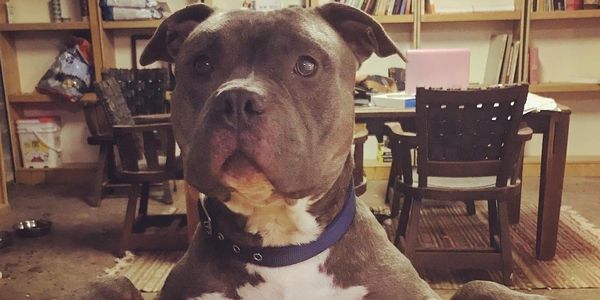 Through all of your generous support for Philly Bully Team, now is the time that we need you the most. We ask you from the bottom of our hearts to read this post and join us in the fight to save River, a dog originally in our care, who we believe has been done horribly wrong by New York Bully Crew, and who has the chance to be rehabilitated if NYBC re-releases him to our care.

River is a dog that the former Philadelphia Bully Crew (Now Philly Bully Team) saved in December of 2017. River was found in the Delaware River on a cold winter night, saved by animal control, and brought to the shelter where we rescued him.

At this time, Philadelphia Bully Crew (us) was working alongside NYBC as they were helping us establish a rescue to help the dogs in our local community. We took River, but since we were such a new operation at time, we had very little foster homes. In order to avoid leaving him at animal control any longer, we set up a space for him to be fostered in our work office.

As time went on, we were unable to find a more permanent foster home for River, we had 6 fosters in our own home, and with his best interests in mind, we asked NYBC to take River into their kennel facility, as we were confident that River would get adopted quickly as their social media exposure was far bigger than ours. It was his best chance of adoption at the time.

We informed NYBC that, although River had exhibited great temperament while with us, he could still have some nervous tendencies. Once River arrived at NYBC, the staff promptly called us to say they were unable to handle the dog as he was aggressive. This was not the same dog we had just spent several weeks with and asked that NYBC take their time with him. Eventually, NYBC adopted River out to a family, to which they later admitted they knew that was a wrong family for him, he then bit someone in the home and was returned the next day. After a few more weeks without improvement, Craig Fields, president of NYBC, called PHBT stating that River was DECLINING in a kennel environment (SWIPE TO SEE TEXTS) & it would be in his best interest to be moved into a foster home and back into the care of PHBT.

We happily agreed to take River back, we just needed a few days to find a foster. Within those few days, we decided to cut ties with NYBC as we did not agree with their organization's practices. We still tried & wanted to take River-we would not give up on him as we felt they had. As we made plans for River to be transferred back to us, Craig asked us to send some vaccines that were provided to our rescue by NYBC when we were getting started. We begged Craig to allow us to keep the vaccines, as we were rescuing dogs who were in dire need of them. We were severing ties with NYBC without any of the donations made to Philadelphia Bully Team (Philadelphia Bully Crew at the time) & needed those vaccines to continue rescue efforts. Craig then blocked the president of PHBT's phone number, and we were unable to continue the facilitation of transferring River into our care.

WHERE ARE WE NOW?

We continued to follow NYBC's social media to see what they decided to do with River since he was becoming more anxious at their kennel. They went months without posting any updates on his progress. Was he getting training? Was he available for adoption? Was he okay? Was he alive? Finally, spring of 2018, we posted our concerns for River on social media.

NYBC answered on their social media and posted a video of him, stating that he was getting training, but doing great! BUT- River disappeared again. It is now January 2019. River is not listed anywhere on their website, he hasn't been posted on social media since July 2018. We had a friend inquire about River via e-mail & an NYBC employee responded that River was not available for adoption, unless to a very specific adopter, and then NYBC employee tried to talk to this person about adopting other dogs, without bothering to see if the person WAS an appropriate adopter.

NYBC is giving River NO chance to escape the environment that, according to the president, is causing his behavior issues. The Dodo recently published a video with the president of NYBC stating that he was able to rehabilitate a people aggressive dog in ONE week. So, why so long for River? River has been there for over a year, they also have a dog trainer on staff--- Why is River being kenneled when according to the president of the rescue, the kennel environment is what is causing his behavior issues? Why won't NYBC release the dog back into our care when it was their request in the first place (SEE ATTACHED TEXTS)? The only thing that matters to us is that we continue to rescue and rehabilitate and give these dogs the lives that they deserve. Help us in this fight to give River his well-deserved chance. We want River back. We want to put him into an intensive 2-4 week board and train program. We want to do what is right by River, and what is humane. We believe that being kenneled for over a year is a triggering environment and NOT what is best for River. We need your help. Please sign this petition to ask NYBC to return River back into our care so we can get him the help he needs and provide him with a true chance at rehabilitation- and hopefully his forever home. Thank you for your continued support.