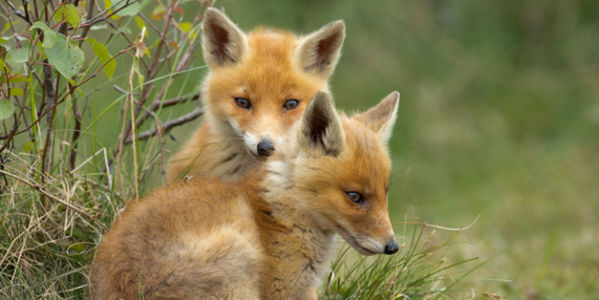 The Fox has a vital role in balancing the ecological cycle of nature by killing rodents and aiding to prevent an excess of their species. They have a very varied diet and surely are a gardeners friend as they rid gardens of pests such as beetles, slugs and grubs along with rats and mice.

Sadly, Foxes are NOT a protected species under Irish wildlife law and are not a gardeners friend. In fact throughout Ireland they are seen as vermin and a pest.

Also, they acquire LIMITED protection from animal cruelty laws. All hunting activities are regulated even hunting which targets species which are NOT 'protected species'. There are also pest control companies that use baited Fox cage traps to catch, injure, disable, stun and KILL the Fox/Foxes.

On average 30000 Foxes are killed YEARLY in Ireland!!!

The EUROPEAN COMMUNITIES (BIRDS AND NATURAL HABITATS) (RESTRICTIONS ON USE OF POISON BAIT) REGULATIONS 2010
makes it an offence for an individual to use any form of meat, fish, other animal substance etc. as bait to poison or stupefy birds or animals such as but not limited to otters and pine martens , unless licensed to do so.

The Department of Agriculture, Fisheries and Food (DAFF) has stated that there is no pesticide registered or approved in the Republic of Ireland for poisoning and stupifying of birds or Foxes.

Alphachloralose was registered, and commonly used, to kill crows and Foxes for a time but this approval was reversed by DAFF, after an EU decision, in November 2008.

NOW Alphachloralose is ONLY registered and approved in Ireland for the control of mice. Therefore ANY poisoning by this substance of Foxes and crows is ILLEGAL in Ireland.

The IMFHA Irish Masters of Foxhounds Association, parades it's BLOOD sport as JUST with no benefit for the environment. It's claims of Fox control are used to give this blood sport respectability. Fox hunters claim NO FOX is killed, it's the thrill of jumping, chasing over fences on horseback that causes the excitement!! If this was the case it doesn't justify the terrorising, exhausting, scaremongering and at the very least injuring the Fox. Also if no Fox's were killed it doesn't explain the 25000 known to be KILLED by HOUND!!! While the other 5,000 are poached, SHOT by farmers and KILLED JUST FOR FUN!!!

I urge you All to please SIGN this petition. To end the suffering and unjust hunting and cruelty faced by the Fox in Ireland. Together let's appeal to Minister for Environment, Community and Local Government and the Minister for Agriculture, Food and Fisheries to protect the fox and prevent it's unjust, cruel, barbaric treatment.

Kind Regards to all

WE THE UNDERSIGNED BELIEVE:

We sign this petition to appeal to you and implore you as Minister for Agriculture, Food and Fisheries (along with the Minister for Environment, Community and Local Government,) with whom responsibility this lies and who's action can immediately STOP AND PREVENT this slaughtering of a species from continuing.