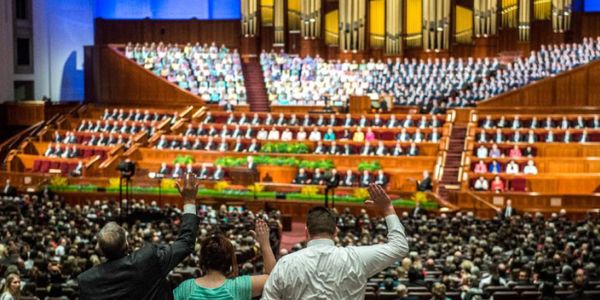 There Are Many Opposed

Recently a small group of people opposed the sustaining of the leadership of the LDS church during general conference. The church tries to paint the picture that all is well in Zion, and many members are scoffing online in their comments about how awful these dissenters are and how insignificant these people’s opposed vote is. The truth is, what they did was brave, and there are many people who feel the same way. They are far from alone. Many who share similar feelings towards the church stay quiet for fear of upsetting their family or friends. Many just don’t care anymore and have moved on in life. But for many of the people like these few who publicly opposed, there is a long list of reasons the church has failed to fix, or even address, for which they also oppose.

Church historian, Elder Marlin Jensen held a Q&A session at Utah State University on January 18, 2012. Elder Jensen has been a General Authority of the Church since 1989. He currently is a member of the First Quorum of the Seventy. Since 2005, he has also served as the Church Historian and Recorder of the Church [as of 2012 - now emeritus].

A questioner asked, “Has the church seen the effects of Google on membership? . . . Is the church aware of that problem? What about the people who are already leaving in droves?”

Jensen's response: “The fifteen men really do know, and they really care. And they realize that maybe since Kirtland, we never have had a period of, I’ll call it apostasy, like we’re having right now; largely over these issues . . .”

Whether or not this petition at some point will go to the church is not decided. There is an apathy among many that feel that the church will never change, which I share. However, what it could do is give people who are having trouble with the church or leaving the church something to look to and know that they aren’t alone. It could also give these people something to point to when members scoff at the idea that all isn’t well in Zion.

This list can be signed anonymously (for some it’s necessary), just use a false name. Please don't sign unless you are or once were a member of the LDS church.

Care2
There Are Many Opposed
SHARETWEET