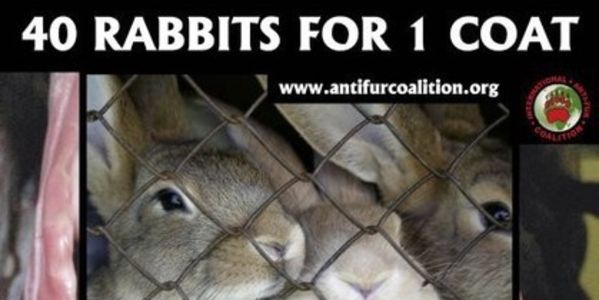 STOP! Ask Rent The Runway To Stop Renting Out FURS

Life on the ‘Ranch’

To cut costs, fur farmers pack animals into small cages, preventing them from taking more than a few steps back and forth. This crowding and confinement is especially distressing to minks—solitary animals who may occupy up to 2,500 acres of wetland habitat in the wild.

The anguish and frustration of life in a cage leads minks to self-mutilate—biting at their skin, tails, and feet—and frantically pace and circle endlessly. Zoologists at Oxford University who studied captive minks found that despite generations of being bred for fur, minks have not been domesticated and suffer greatly in captivity, especially if they are not given the opportunity to swim.

Foxes, raccoons, and other animals suffer just as much and have been found to cannibalize their cagemates in response to their crowded confinement. Animals in fur factory farms are fed meat byproducts considered unfit for human consumption. Water is provided by a nipple system, which often freezes in the winter or might fail because of human error. Poison and Pain No federal humane slaughter law protects animals in fur factory farms, and killing methods are gruesome. Because fur farmers care only about preserving the quality of the fur, they use slaughter methods that keep the pelts intact but that can result in extreme suffering for the animals. Small animals may be crammed into boxes and poisoned with hot, unfiltered engine exhaust from a truck. Engine exhaust is not always lethal, and some animals wake up while they are being skinned. Larger animals have clamps attached to or rods forced into their mouths and rods are forced into their anuses, and they are painfully electrocuted. Other animals are poisoned with strychnine, which suffocates them by paralyzing their muscles with painful, rigid cramps. Gassing, decompression chambers, and neck-breaking are other common slaughter methods on fur factory farms. The fur industry refuses to condemn even blatantly cruel killing methods such as electrocution. According to the American Veterinary Medical Association, electrocution causes “death by cardiac fibrillation, which causes cerebral hypoxia,” but warns that “animals do not lose consciousness for 10 to 30 seconds or more after onset of cardiac fibrillation.” In other words, the animals are forced to suffer from a heart attack while they are still conscious.

I am petitioning RENT THE RUNWAY for renting and the sale FUR by Adrienne Landau, and any furs considered for retail on this site. Whether it came from an animal on a fur farm or one who was trapped in the wild, every fur coat, trinket, and bit of trim caused an animal tremendous suffering—and took away a life. Animals on fur farms spend their entire lives confined to cramped, filthy wire cages. Fur farmers use the cheapest and cruelest killing methods available, including suffocation, electrocution, gas, and poison. Adrienne Landau is a member of FICA – Fur Information Council of America, the largest fur industry association representing fur retailers and manufacturers across the country who collectively account for over 80% of U.S. fur sales. This is not something to be proud of nor what I look for in doing business with any company.