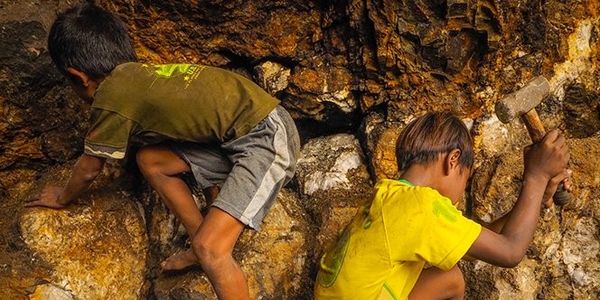 Stop poisoning children by putting them to work in gold mines!

Please sign and share this petition worldwide in an effort to put an end to children working in the gold mines and subjecting them to the poisoning of the mercury and other gases they encounter.

Mining most often in many countries is a family affair.  It is not just a business for the “man of the house” but also the children.  It is estimated that more than one million children work in the gold mining industry.  This is predominantly an international issue.

Most of us may not realize what goes into gold mining; it is not as visualized on television, panning for gold.  It involves going into mines, drilling and blasting to find these valuables. Often times, while mining, the tunnels cave in and fill with gases that can cause suffocation and inhalation of poisonous substances.   These are toxic to all humans, especially the millions of children in the industry because their brains are still growing and extremely vulnerable.

Children should not be working in these mines that could affect the rest of their lives.  The mercury present in the mining industry, along with other gases and toxins can cause brain damage, tremors and memory loss in such young, sweet lives, along with a host of other medical problems.  Substances like the mercury continue to build up in the body over time and are irreversible.  It is not only breathed in but can be absorbed through the skin‘s surface.

Child labor unfortunately is very common in many international countries such as Indonesia and the Philippines.  That accounts for more than 35 percent of all humans affected by mercury emissions worldwide.  Children have their whole lives ahead of them and should not be subjected to such a high-risk of brain damage and poor life.

Several of these Southeast Asian countries are restricting the use of child labor but many of the developing countries with a weaker government are finding it difficult to enforce the laws to keep children out of the mining industry.  The Governments need to strengthen their foundation with stricter regulations and policies to keep children out of mines.  Officials and authorities in each country must not only implement the laws but enforce them by monitoring the mines to ensure children are not be subjected to poisoning working in the mining industry. These young people do not deserve to succumb to the debilitating effects of poisoning by working them in the gold mines.

Please sign and share this petition worldwide in an effort to put an end to children working in the gold mines and subjecting them to the poisoning of the mercury and other gases they encounter.

The International POPs Elimination Network (IPEN) and Child Labor Commission – Please do whatever it takes to keep children out of gold mines worldwide.  These young people should not be subjected to poisoning by working in the mining industry, putting them at risk for brain damage and other huge medical problems.  Ensure that all countries involved in mining are banned from allowing children to work in the mines and punish those who do not abide by the laws to protect their kids from harm and danger presented to them in these gold mines.

Care2
Stop poisoning children by putting them to work in gold mines!
SHARETWEET