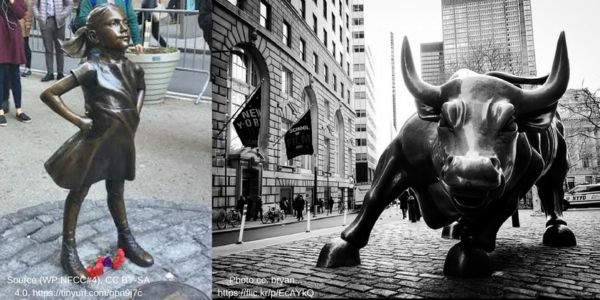 "Know the power of women in leadership.  SHE makes a difference."

On the eve of International Women's Day a statue was installed of a "Fearless Girl" girl standing proudly in front of Wall Street's "Charging Bull", presenting a powerful message about Women's equality on Wall Street.

This statue is meant to draw attention to the lack of women representation in corporate boards.

According to the Institutional Shareholder Service's data, women are not represented within almost a quarter of company boards in the Russell 300.

As of now this statue is supposed to be a temporary fixture and is expected to last up to a month; however, women's equality is not a temporary issue.

As women continue to make 79 cents to every dollar a man makes, women's equality is still a very pressing issue in this country.

The significance of Women's equality should not be limited to a day, a week, or a month.

This statue is a powerful statement and should not be removed.  The "Fearless Girl" should remain as a permanent structure to show the rest of the world that women will not back down.

We will no longer tolerate being underpaid, treated unfairly, and under-represented in society.

Please sign in support of the "Fearless Girl" statue and ask that the statue remain as a permanent structure on Wall Street.

The "Fearless Girl" statue is a powerful statement about the importance of women's equality across the nation.  I strongly urge you to keep this statue as a permanent structure on Wall Street.