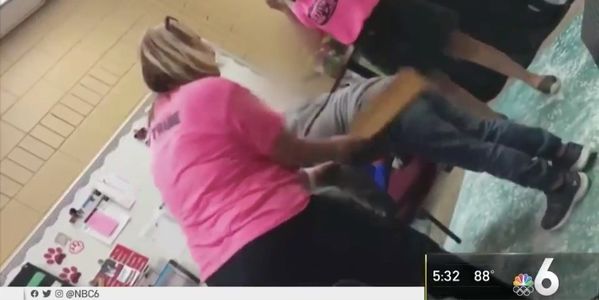 *UPDATE* The State Attorney's Office has officially decided to not press charges against Melissa Carter for violently beating a 6-year-old child with a wooden paddle in a school where corporal punishment is illegal. This is a miscarriage of justice, plain and simple. But we cannot give up the fight. Melissa Carter cannot be allowed to work at a school where she has access to any more vulnerable children. Please keep signing and sharing the petition asking that Melissa Carter be fired from Central Elementary School.

A Florida principal was caught on camera beating a tiny 6-year-old girl with a huge, heavy, wooden paddle. Corporal punishment in schools is illegal in Hendry County, where this took place. Regardless of the law, this is horrifying violent abuse that must be met with swift, firm action.

Sign the petition and demand that Hendry County School District fire Principal Melissa Carter and the other school clerk in the video immediately, and that the State Attorney's Office charge them with child abuse!

The attack took place in the middle of April in front of the poor child's mother. When the school called the girl's mom earlier that day, they told her that her daughter had scratched a computer screen -- unfortunate, but probably something that should be expected at an elementary school, where small children are still learning how to behave. On the call, the school told her mom that she would need to pay a $50 fee for the damages, and they mentioned "paddling" -- but because she speaks Spanish, the girl's mother didn't quite understand what in the world that could mean.

It became clear once she arrived at the school exactly what that meant. Her daughter was already in the principal's office, along with Principal Carter and a school clerk. Melissa Carter ordered the 6-year-old to bend over a chair, and proceeded to beat her with a huge wooden paddle the size of the little girl's torso. She hit her so hard the first time that the little girl turned away, wailing and trying to escape. But the school clerk and Principal Carter grab her, screaming at her and proceeding to beat her two more times. The child's mother looked on helplessly, scared that if she didn't film no one would believe her and this would continue happening to her baby, or her classmates. This is too often the case for non-English speakers in the U.S. -- they have to go to far greater lengths just to be believed by authorities and the powers that be when they need help.

We know from extensive research that any sort of corporal punishment of children, regardless of severity or circumstances, negatively impacts them long term. Additionally, corporal punishment does not yield better behavior, it only yields fear and trauma.

2020 and 2021 have been some of the hardest years many of us have seen. The pandemic has affected people in myriad ways, from threatening personal health and the safety of family and loved ones, to destabilizing many folks' financial, professional, and emotional wellbeing.

One group that's been acutely impacted are school children who haven't been able to have a consistent, stable school year because of the COVID-19 pandemic. For the very youngest among them, kindergarteners and first graders, there isn't even a memory of how school should "normally" be! That, coupled with the intense emotions that come with being so young, have made things really hard for these kiddos. Physical abuse is never, ever, EVER an appropriate solution to a child's behavioral issues -- but especially now, when so many kids are suffering, this is especially abhorrent.

This 6-year-old girl was met with physical and emotional trauma for damaging property. Obviously, Melissa Carter and the school clerk who assisted her in this abuse are not fit to be in positions where they have access to children who they are supposed to be caring for, nurturing, and educating. But so far, Carter has only been placed on administrative leave, and it's unclear what repercussions, if any, the school clerk has faced.

That's totally unacceptable. Sign the petition to demand they are both fired and charged with child abuse!
Sign Petition
SHAREShare With FriendsTWEETEMAILEMBED
Sign Petition
See more petitions:
You have JavaScript disabled. Without it, our site might not function properly.