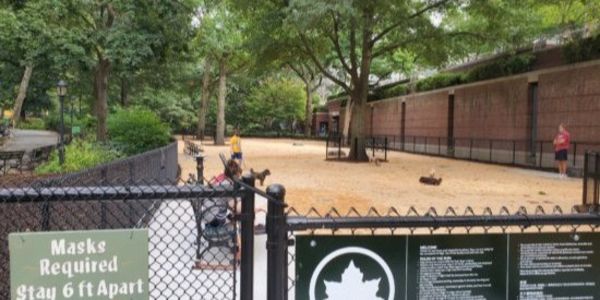 RENOVATE THE RENOVATION - SUPPORT US BY SIGNING THIS PETITION!

The New York City Department of Parks and Recreation has failed to improve usability at the Bull Moose Dog Run after a one-year, $875,000 renovation. The mandate to repair the drainage problem has been met, but the surface gravel is inadequate and dangerous. The renovated run opened on July 24th, 2020 to dozens of disappointed dog owners who report that they and their dogs will not use the run because of the surface material.

The problems with the surface material and one other problem (item #12) are as follows:

How Did a Dangerous, Inferior Surface End Up Being Used?

The renovation plan called for the same stone screenings (gravel) that was always used. But the same was not used. According to an unnamed Parks spokesperson, it was reported in West Side Rag (August 26, 2020, by Carol Tannenhauser) that  "The standard stone screenings used in most dog runs are unavailable for the foreseeable future, because of production issues, so an alternative had to be used in order to make sure this project could be completed. The new surface material was selected for its good drainage characteristics and similarity in shape and size to the previous stone screenings. We will consider any issues brought to our attention so we can evaluate the performance of this material over time."

THE SCREENING WAS NEVER TESTED PRIOR TO APPLICATION

Importantly, we did our own research during the 2019-2020 renovation on the availability of the gravel that was supposed to be used and it was readily available at at least two quarries in NJ. We were told by Parks that these were not approved vendors and so the inferior product was used.

We find the Parks Department's rationale for their actions irresponsible and indifferent to the needs of the dogs and humans who use the dog run. Our objective for this petition is to bring these concerns to the attention of Parks Department officials, and above all else, we want Parks to replace the current surface NOW with an alternative that is safe and comfortable for our dogs.

The Bull Moose Dog Run is one-quarter of an acre, located in Theodore Roosevelt Park on the grounds of the American Museum of Natural History at West 81st street and Columbus Avenue in New York City. Prior to the current renovation there was an 8-year battle to get the renovation started. During that time and for years before, 1) ¼-inch bluestone covered the dog run secondary to soil erosion lifting it to the top, making it painful and unsafe for dogs' paws, and 2) half the run, from side to side on the western end, would flood after a rainstorm, leaving filthy standing water, sometimes for days, for attracting mosquitoes and rats, and for dogs to drink. The run has a decades-long history of neglect.

In 2016, after countless hours of voluntary service by community members working in cooperation with local appointed and elected city officials, $875,000 of taxpayer dollars were generously allocated at the discretion of the offices of district representatives to the Parks Department for remediation of the serious drainage and surface problems at the run that caused health and safety risks to dogs and their owners. The recent renovation started in August 2019 and finished on July 24th, 2020. The current dog run users are sorely disappointed at the outcome of the renovation and demand that the surface be replaced.