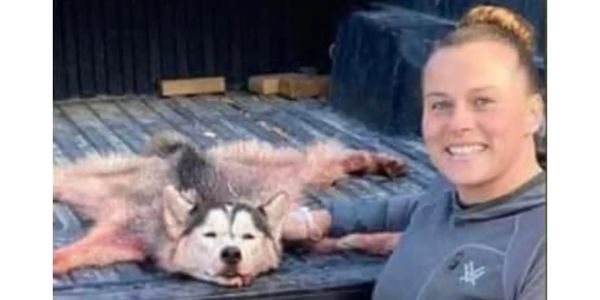 She Shot and Skinned an Innocent Dog, Posing Happily With Its Corpse. Demand Justice.

Care2 Update (11/7/2022): Authorities have finally cited the woman who murdered the poor husky for animal cruelty. However, she pleaded not guilty, and will appear in court again on December 20, 2022. It's imperative that she's stripped of her hunting license. Keep signing and sharing!

When a Montana woman was out hunting, she mistook a Siberian husky for a wolf pup and shot it dead. She skinned the dead dog, and posted photos on Facebook, boasting about her kill. The graphic post went viral on social media, and many people pointed out the horrific truth – the woman killed a dog, not a wolf. Instead of being horrified and apologetic for her mistake, the woman added insult to injury by saying she would've done the whole thing over again given the chance, even knowing that it was a domestic dog she slaughtered.

Sign the petition to demand the Flathead County Sheriff's Office treat this like the animal cruelty case it is, and charge this woman!

The Flathead County Sheriff's Office released a statement that the dog was one of 12 Husky-Shepherd mixes that had been dumped in the woods by an unidentified person. Together, the person who abandoned those poor dogs and this trigger-happy hunter are responsible for the gruesome, tragic death of a dog that only needed a loving home.

Wolf hunting itself has come under fire in recent years in the United States – gray wolves were nearly hunted to the point of extinction, and only just recently had their federal protections returned. While wolf hunting is legal in the state of Montana, it is rather concerning how excited this woman was to kill what she thought was a member of the next generation of threatened wolves – and how little she knew what she was doing, accidentally killing a dog instead.

There is no reason this woman should be allowed to avoid any sort of repercussions – nor should she be allowed to retain her hunting license when she clearly isn't responsible enough to have one.

Sign the petition to demand the Flathead County Sheriff's Office charge this woman with animal cruelty and revoke her hunting license!

Care2
She Shot and Skinned an Innocent Dog, Posing Happily With Its Corpse. Demand Justice.
SHARETWEET